God had another plan for me

When Germán Cruz was 17 years old, he discovered that his mother was suffering from domestic violence in the United States. He sought revenge. He left Puebla, Mexico, and walked for five days in the desert until he crossed the border of Douglas, Arizona. From there, he made another long journey to reunite with his mother in Rhode Island.

He was determined to hurt his mother’s partner and return to Mexico. “He liked to drink and mistreated my mother,” says Cruz. “I really hated him and came to confront him.” But something changed his plans. When Cruz arrived in Rhode Island, he went to St. Patrick Church in Providence to thank God for allowing him to arrive safely from the difficult journey.

In the parish, a woman approached him, hugged him, and gave him a holy card of the Immaculate Heart of Mary. She said: “The Virgin is not going to let you do what you wanted to do.” He still keeps this holy card in his wallet. 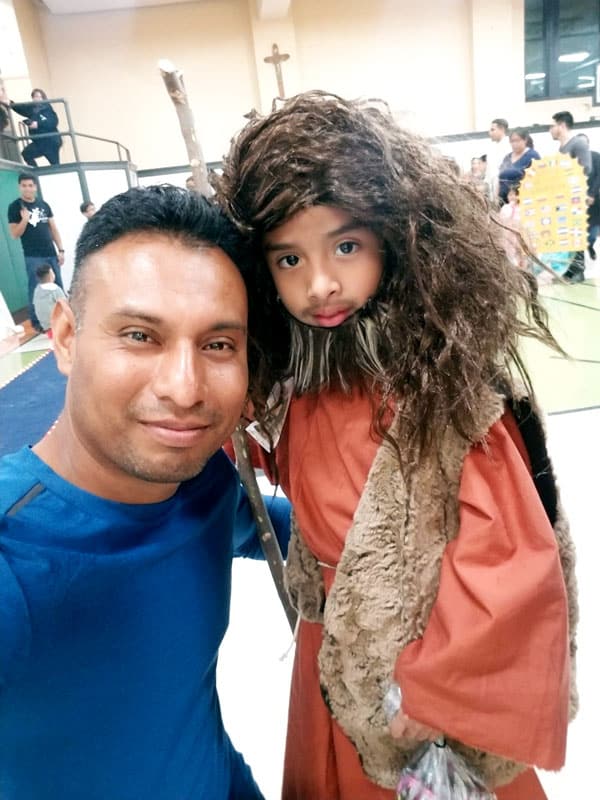 On the eve of All Saints’ Day, young hispanic Catholics organize an activity with games and dynamics for the children of the San Patricio community. In the photo, Germán Cruz with a child who represented San Juan Bautista in a dramatization they performed. (Germán Cruz / Rhode Island)

The reunion with his mother, after six years of separation, was not what he expected. She preferred to continue the relationship with her partner, in spite of the abuse, and Cruz decided to move away from her and the Church.

“I used to arrive at my bedroom and felt an immense spiritual emptiness,” he says. “I was in a big country, without the support of anyone.” But one day, he was invited to attend a “Life in the Spirit” seminar at the same church where he received the holy card. With emotion, Cruz recalls a moment in the seminar when the participants were praying and asking to be baptized with the fire of the Holy Spirit. He asked God to allow him to feel that presence.

“I was looking at the tabernacle and all of a sudden a glowing ray of light came out and landed on each participant’s head,” says Cruz. “I felt God was telling me: ‘I was always here.’ I experienced an encounter with God and love in my heart.” It was a moment of conversion that allowed him to reflect on the purposes God has for each person.

“I recall the holy card the woman gave me and realized God was always with me; he was the one who didn’t allow me to hurt my mother’s partner,” says Cruz. “God had another plan for me.”

From that moment, Cruz promised to be a servant of God in St. Patrick parish. It has 12 ministries and celebrates five Masses in Spanish each week. It also has St. Patrick Academy, a college-preparatory high school. St Patrick is one of 178 parishes in the Dioceses of Providence, which has 680,000 Catholics. 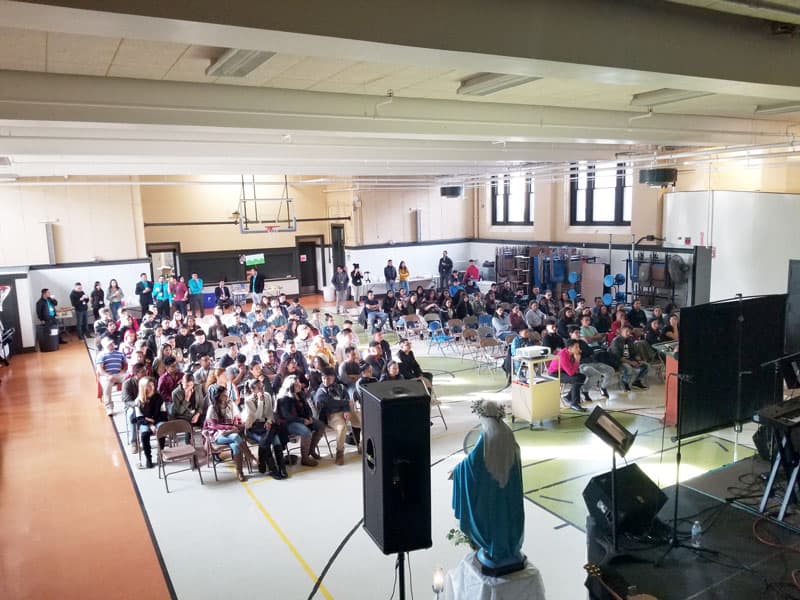 Since 2013 Cruz has been the coordinator of the Hispanic Young Adult ministry, Spring of Life. The group of about 40 young people meets on Sundays at the parish and develops themes and activities on the Bible and organize games. Sometimes they meet at the park. “We pray, we thank God and read the Bible,” says Cruz, now 36. “We preach as Jesus did.”

A few years ago, the youth group started a music ministry, Young Servants of Christ, with Cruz as a coordinator and guitarist. The choir plays at the retreats and once a month at Mass.

Western Gomez, 23, plays the piano for the group. Arriving from Guatemala in 2014, he crossed the border and immigration officials sent him to prison for three months. He applied for asylum. His family sold what they had in their country and borrowed money from their neighbors to pay the $9,000 bail as he awaited his court hearing. Without knowing anyone, Gomez felt lost until he went to St. Patrick and joined the youth and music ministries, “I am comfortable sharing my thoughts with young people,” says Gomez. “I feel peace when I meet with them because I experience the presence of God.” His asylum application was denied, but a few months ago he married and he is applying for a residency card.

Gomez appreciates the support of the youth group during difficult times. About his friendship with Cruz, he says: “I feel like God put him in my way. I consider him as a brother.” Cruz, who has a small construction company, offered Gomez a job.

When Cruz listens to stories of young people like Gomez, he identifies with them. “Among youth, there is a great spiritual need. Many of them feel alone and don’t have the love or care of their families, either because they have no family here or their parents work all day,” he says.

Looking at this reality, Cruz asked his pastor, Father James Ruggieri, to allow him to organize retreats for Hispanic youth.

Cruz has organized four retreats. The first was attended by 47 young people and since then the number has increased to more than 100. “Retreats are a space for young people to know God and how great his love is, with which it is possible to heal wounds and improve relations with others,” says Cruz. He now has a good relationship with his mother, who is separated from her partner who abused her.

Cruz, who is in the process of solving his immigration status, feels grateful to God for having his wife Beatriz and their daughter by his side. He recently joined the family pastoral team with his wife. “God has called me to inspire more young people to feel the desire to serve,” says Cruz. “I pray and ask God to let them experience his love and mercy.”

Featured Image: Germán Cruz, in front with a gray sweater, surrounded by young Hispanic Catholics who participated in the first retreat in St. Patrick parish of the Diocese of Providence. (Germán Cruz/Rhode Island) 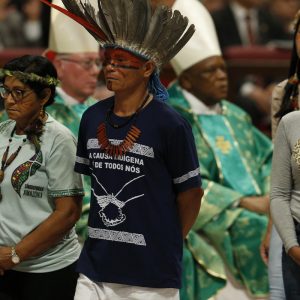 WEB-ONLY FEATURE: Historic synod looks at ministry, mission, ecology and indigenous rights and culture in the Amazon || In...