Kindling Faith with Immigrants in Japan

The afternoon begins to wind down on this first Friday of June at the Infant Jesus Church in the city of Iga-Ueno in the Mie prefecture in Japan.

Outside, on a billboard that welcomes parishioners and announces in several languages the Mass schedule, is a quote, in Spanish, from Saint Magdalena de Canossa: “Do not be afraid; after the storm the sky becomes more serene.”

The quote seems to summarize precisely the meaning this parish has for the community of Catholic immigrants from Peru, Bolivia, Brazil, the Philippines and Vietnam who work in the city’s industrial zone.

“It is a shelter, a refuge for everyone who comes here and, above all, an extended hand of love and friendship,” says Maryknoll Father Roberto Rodriguez, pastor of this church that was founded by Maryknoll missioners more than 60 years ago. “We continue the mission of announcing the kingdom of God to all who come now, to the new Catholics of Japan, the immigrants.” 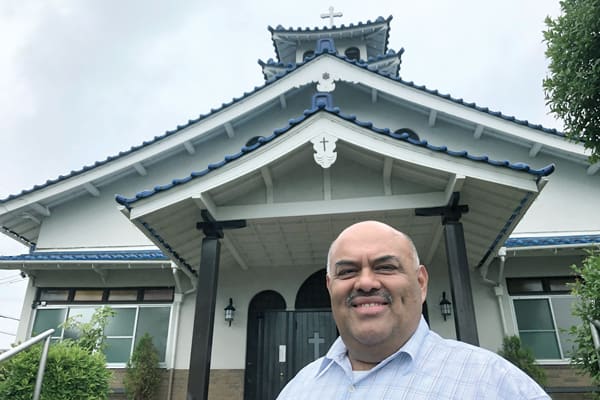 Maryknoll Father Roberto Rodriguez, who has served in Japan since 2009, ministers to Japanese Catholics and Catholic immigrants in Japan. (P. Saunders/Japan)

Immigration to Japan began in the 1980s and 1990s, when the country—already an economic power following the industrial boom after World War II—began to require more labor than it could meet domestically. Today, immigration continues because the Japanese population is aging and birth rates are low. The last census of 2015 indicated that about 2 million people, less than 2 percent of the total population, were immigrants in Japan. But some unofficial figures estimate that the number of immigrants in Japan reaches 6 percent.

“The immigrant experience is the same as everywhere, but here the suffering is twice as much.” Father Rodriguez says, explaining the cultural and linguistic clash is greater in Japan, especially for immigrants from Latin America. “Latino immigrants in the United States, although they have difficulties learning English, share the same alphabet and a Western lifestyle, while, in the East, Japanese thinking and culture are completely different, the language characters are very difficult, the culture is very strict, demanding.”

The cultural difference, the priest continues, is even observed between Japanese Catholics and immigrant Catholics, in a country where Catholics account for only 0.5 percent of more than 126 million inhabitants.

“The Japanese Catholic tends to view religion solemnly, silently, as a self-reflection, while Latino immigrants are festive; the homage, the joy is different,” says Father Rodriguez. At Mass, for example, the Japanese do not give each other the handshake of peace, he says. They bow instead. 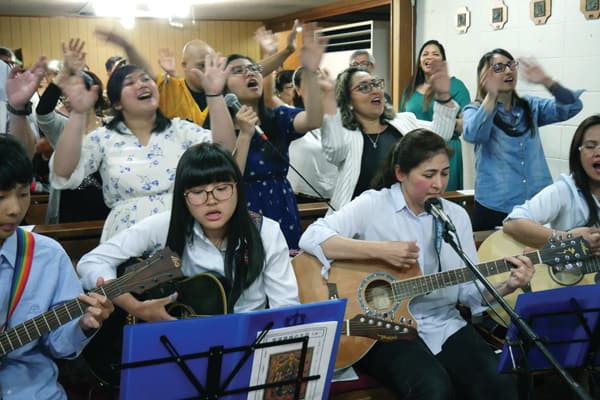 A choir, formed by immigrants in Japan, sings at the Infant Jesus Church
in the city of Iga-Ueno, where Father Rodriguez serves as pastor. (P. Saunders/Japan)

About 350 Japanese families are parishioners at Infant Jesus parish. Although approximately 10,000 Brazilians, 3,000 Peruvians and 2,000 Filipinos, as well as immigrants from Bolivia and Vietnam, live and work in the area, most of them participate in the parish only for important festivities, Father Rodriguez says. The majority of Catholics in Iga-Ueno, and in Japan in general, he says, are immigrants.

On this Friday, the Mass for the immigrant community begins at 8 p.m. in order to allow time for people coming from their jobs. The choir members have arrived early to rehearse. In the kitchen, parishioners organize food and desserts from different countries that they have brought to celebrate the 24th anniversary of Father Rodriguez’s ordination to the priesthood.

One of those parishioners is Carmen Muray, a Peruvian who has been living in Japan for 28 years and has attended the parish of the Infant Jesus since her arrival. “When I got to Japan, I felt in need of God and found the house that Maryknoll built, and I am, we all are, very happy and eternally grateful,” says Muray, who immigrated alone in search of work, leaving her husband and children in her native Lima. Her family eventually joined her in Japan.

Muray and other parishioners talk about the difficulties immigrants face in Japan. Some came to work with temporary visas for “technical training,” which in practice hinders their ability to obtain Japanese citizenship and keeps them from receiving a fair salary for their work. Others came because of an immigration policy that allows Japanese descendants born in other countries to live and work in Japan.

Most of the immigrants say they feel some sort of social discrimination because they were not born in Japan. Most came with the idea of working to raise money and return to their home countries—a dream that for many has faded with the difficulties of life and the passing of the years. 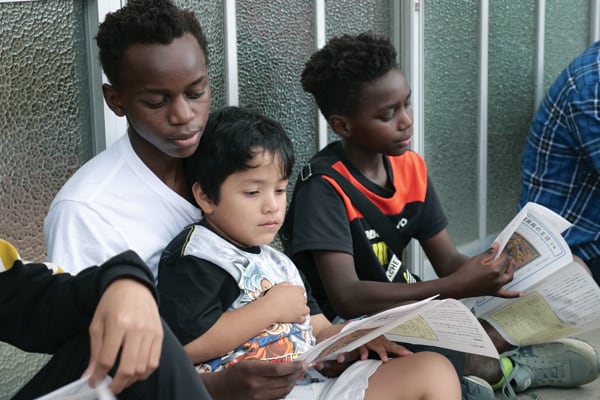 Neomi, who preferred her last name not be used, works in a factory assembling parts for brakes. She emigrated from Brazil 17 years ago and says the difficulties she faced were long working days, language barriers and adapting to the weather, in addition to separation from her husband and children. “In that moment of sadness, I came to church and found comfort,” she says. “In silence, I sought inner spiritual strength, something to help me go on.”

Father Rodriguez feels at heart the suffering of the immigrant. He was once an undocumented immigrant in the United States. Born in Sensuntepeque, El Salvador, he was 22 when his father urged his son to flee during the civil war because as a young school teacher he had expressed opposition to the country’s oppressive government. That criticism exposed him to the risk of being arrested, killed or disappeared, all of which had happened to some of his friends.

In 1981, 23-year-old Roberto Rodriguez traveled with a group of 10 people from El Salvador through Guatemala and Mexico to Juarez, where he crossed the Rio Grande into the United States. Initially, he did temporary jobs: fruit harvesting, restaurant work and construction. He lived the difficulties faced by undocumented immigrants who must leave their families and countries behind, until he learned that Canada offered asylum to Salvadorans who had fled the civil war.

During his immigration journey, Rodriguez read MARYKNOLL magazine, which renewed a desire he had as a child to pursue a priestly vocation. After receiving asylum in Canada and becoming a Canadian citizen, he returned to the United States to join Maryknoll as a seminarian. In 1995, he was ordained a Maryknoll priest and initially served in the Philippines. Since 2009, he has served in Japan, where he directs two parishes, Infant Jesus and St. Elena in the city of Nabari. Both are in the Diocese of Kyoto, where he serves Japanese Catholics and Catholic immigrants. 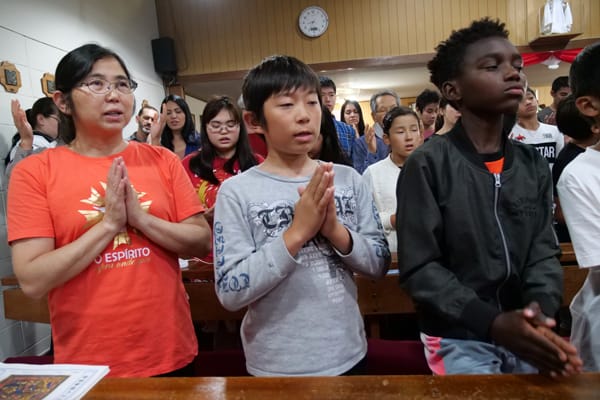 The day’s Mass at Infant Jesus is a vibrant multicultural and multilingual celebration. The benches are full with the diverse faces of immigrants who give new life to the Catholic Church in Japan. Father Rodriguez celebrates the Mass in Japanese, Spanish and English. The choir sings in those languages while a screen displays translations of the songs.

“It’s Pentecost,” says Father Rodriguez, who has achieved—with love, effort and patience— something he thinks could serve as a model for other parishes in Japan.

After Mass, the festive atmosphere spreads to the parish hall, where platters of sundry food reflect the international diversity of the parish. Some parishioners from the Philippines sing a song for the occasion. A group of children in traditional dress from the Peruvian Andes performs a folk dance.

In the unity that faith provides, no one is an immigrant this day. They are all the Church, the people of God. The children invite Father Rodriguez to dance with them. Here is a reflection of Pentecost and the joy of the Gospel in Japan. 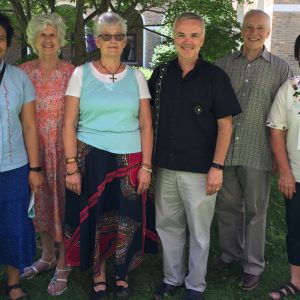 Maryknoll sisters and Maryknoll affiliates join in a spiritual ministry as prayer partners for the world || Cindy...