The Synod of Bishops for the Amazon is a time of reflection, dialogue and listening to the needs and sufferings of indigenous people, Pope Francis said.

“The Holy Spirit is the primary actor in the synod. Please, do not kick him out of the room,” the pope said, opening the gathering’s first working session Oct. 7.

Speaking off-the-cuff, the pope said he was saddened to hear a “sarcastic” remark from a synod participant about an indigenous man wearing a feathered headdress who presented the offertory gifts at the synod’s opening Mass Oct. 6.

“Tell me: What difference is there between having feathers on your head and the three-cornered hat worn by some officials of our dicasteries?” he asked, eliciting applause from synod participants. 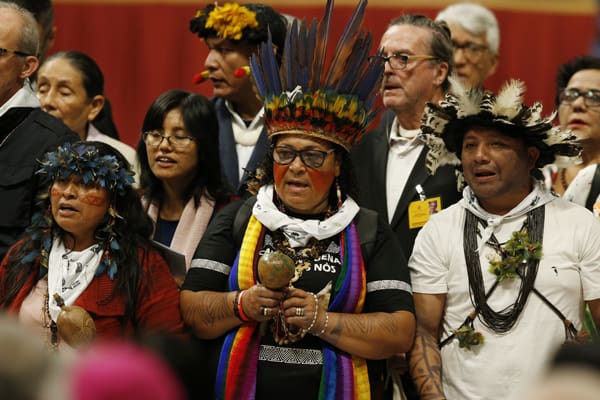 People participate in a prayer service in St. Peter’s Basilica at the start of the first session of the Synod of Bishops for the Amazon at the Vatican Oct. 7, 2019. Pope Francis called on participants to listen and discern “guidance of the Holy Spirit.” (CNS/Paul Haring)

Instead of becoming a series of reductive discussions that only undermine “the poetry” of indigenous people and their cultures, he said, the synod is a way for the church to walk with them “under the guidance of the Holy Spirit.”

The synod was not called to “invent social development programs or museum-like cultural guardianships or pastoral actions in the same noncontemplative style that leads to actions that give counter signs,” the pope said.

The first full day of the synod began with a prayer service in front of the altar of St. Peter’s Basilica with members of indigenous communities standing arm-in-arm with cardinals and bishops singing as they waited for Pope Francis. 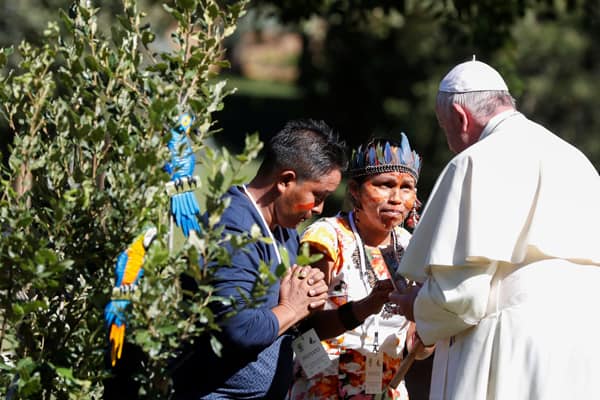 Pope Francis greets members of an indigenous community of the Amazon during a celebration marking the feast of St. Francis in the Vatican Gardens Oct. 4, 2019. (CNS/Yara Nardi, Reuters)

When the pope arrived, he led the invocation of the Holy Spirit’s assistance with the chanting of “Veni, Creator Spiritus” (“Come, Holy Spirit”) before processing with the large group from the basilica to the synod hall.

In his speech, the pope said it was important that the church stand with the people of the Amazon and steer clear of ideologies and “ready-made programs that attempt to ‘discipline’ the Amazonian peoples, discipline their history and their culture.”

Ideologies, he said, are a “dangerous weapon” that can lead the church toward a pretentious attitude that reduces the understanding of indigenous people and their cultures to “categories of ‘isms'” and prejudiced name-calling.
The pope also encouraged synod participants to reflect, to listen with humility and to speak with courage, “even if you are embarrassed.”

Like at the Synod of Bishops on young people last year, he said, there will be a time of silent reflection after every four speeches in the synod hall.

“Someone told me, ‘It’s dangerous, father, because they are going to fall asleep.’ The experience at the synod on young people, where we did this, was the contrary. They usually fell asleep during some of the interventions and would wake up in the silence,” he said, drawing laughter from participants.

Highlighting the importance of responsible journalism in reporting the synod accurately, the pope urged participants to act with prudence when speaking to the press, adding that the synod “can be ruined a bit” by members speaking too freely with reporters.

Pope Francis said this often leads to forming two synods: one inside the Vatican and one outside.

“There is the inside synod that follows the path of Mother Church, of caring for the processes, and the outside synod that, due to information given flippantly and given with imprudence, causes those who inform to commit errors,” the pope said.

For more Catholic News Stories on the Amazon Synod see:

God in All Things: Amazon Synod Looks at Indigenous ‘Theology of Creation’

Featured Image: Pope Francis speaks at the start of the first session of the Synod of Bishops for the Amazon at the Vatican Oct. 7, 2019. (CNS/P. Haring) 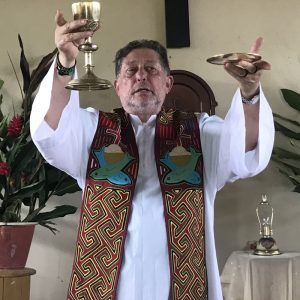 WEB-ONLY FEATURE: || The Synod of Bishops for the Amazon saw the emergence of key synod themes in its first week, including...