The Synod of Bishops for the Amazon saw the emergence of key synod themes in its first week, including support for the ordination of married indigenous men, pleas for respect for indigenous culture and denunciations of violence against the earth.

In synod working sessions Oct. 7-12, more than 90 voting members of the synod addressed the assembly and 20 observers, special guests and delegates from other Christian churches made their interventions. The Vatican synod hall is hosting 185 voting members, 25 experts, 55 observers, six delegates from other Christian communities and 12 special guests who are experts on various topics the synod is discussing.

Except for the formal introductions to the synod’s work Oct. 7 and Pope Francis’ remarks on the occasion, the Vatican has released no texts from the synod. Instead, the press office is distributing twice daily summaries from Vatican News and invites three or four synod participants to meet the press each day during the midday break. 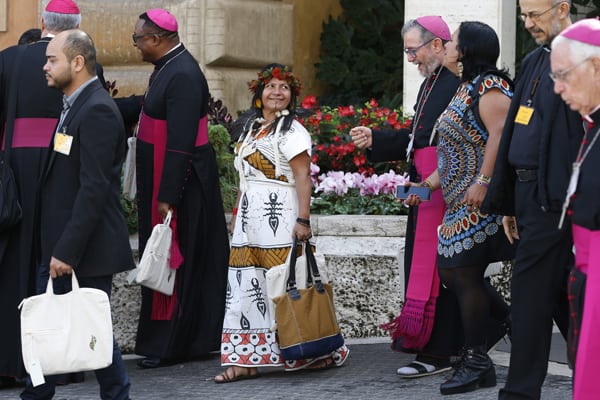 Bishops and lay participants leave the first session of the Synod of Bishops for the Amazon at the Vatican Oct. 7, 2019. (CNS/Paul Haring)

From the summaries and the comments of briefing participants, the main discussion topics can be grouped as: ministries in the church; destruction of the environment; ending violence against people and the environment in the region; indigenous rights and culture; evangelization and mission; and migration, including the move of indigenous people from villages to cities.

The topic of ministries included how candidates for the priesthood are identified and trained, the need to expand use of the permanent diaconate, the possibility of ordaining married indigenous elders — the so-called “viri probati” or men of proven virtue — and support for some official recognition of the ministerial service of women, especially in the Amazon, including the possibility of women deacons.

Retired Bishop Erwin Krautler of Xingu, Brazil, told reporters Oct.9 that he believed that of “the bishops who are in the Amazon region, two-thirds are in favor of the ‘viri probati.'” 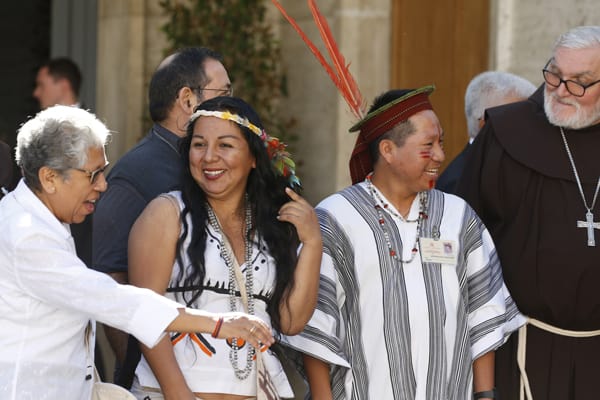 Participants in traditional indigenous dress leave a session of the Synod of Bishops for the Amazon at the Vatican Oct. 9, 2019. (CNS/Paul Haring)

Most of the Vatican News synod summaries included mention of the dramatic lack of access to the Eucharist in Amazonian communities because of a lack of priests and, therefore, about suggestions for ordaining married men who already are recognized leaders — both socially and religiously — in their communities.

The summary for the evening discussion Oct. 12, however, seemed to indicate that as synod members discussed “viri probati” more in depth, there was an examination of the challenges the practice could raise.

“Some contributions highlighted that the lack of vocations is not particular to the Amazon,” which led to the question of why an exception to mandatory celibacy for most Latin-rite priests should be given only for one region of the world.

At least one participant suggested the ordination of “viri probati” should be the subject of a future synod.
Others used the discussion to highlight the important sign and witness of celibacy, especially at a time when “today’s world sees celibacy as the last rampart to be demolished using the pressure of a hedonistic and secular culture. It is, therefore, necessary to carry out an attentive reflection on the value of a celibate priesthood,” the summary said. 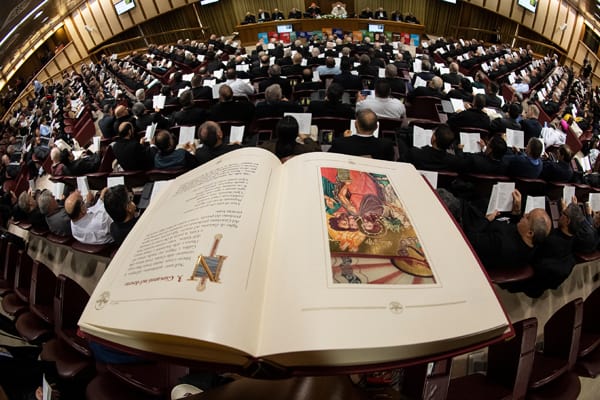 Pope Francis leads a session of the Synod of Bishops for the Amazon at the Vatican Oct. 8, 2019. (CNS photo/Vatican Media)

The same summary indicated the discussion continued and included the value of have men from a community ordained for that community as part of what many synod members described as a “ministry of presence” rather than a “ministry of visit,” where a priest comes once a month or twice a year to celebrate the sacraments.

“It was also suggested,” the summary said, “that the synod could lay the foundation for this new step forward in faith in the Holy Spirit, which must be stronger than the fear of making a mistake.”

Over and over, synod members heard of the important role women in the Amazon play as community leaders, catechists, prayer leaders, evangelists and protectors of creation. Repeated calls were made to institute formal recognition of their role in the church, perhaps including the diaconate.

But more immediately, many synod participants continued the call for a change in women’s roles within the synod itself, noting that while a non-ordained religious brother could be a voting member of the synod, none of the religious sisters could be.

Some of Pope Francis’ strongest words at the synod, both in his public opening talk and again Oct. 9, according to one participant, were focused on the respect due to indigenous culture and his disappointment at sarcastic or stereotypical remarks about indigenous clothing and prayer at the synod itself. 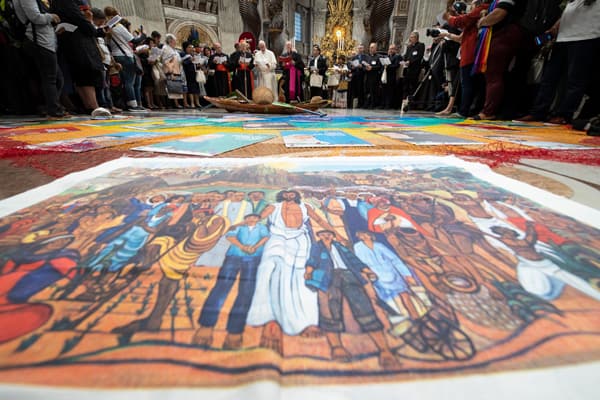 Pope Francis attends a prayer service at the start of the first session Synod of Bishops for the Amazon at the Vatican Oct. 7, 2019. (CNS photo/Vatican Media)

But synod members, according to the summaries, went further, asserting that since “the church considers with benevolence everything that is not tied to superstition,” studies should be made of the various cultural expressions and rituals used throughout the region at liturgies and in connection with baptisms, marriages and ordinations with the aim of developing an “Amazonian rite” for Catholics in the region.

Of course, in the first week many synod members focused on the destruction of the Amazonian rainforest and the pollution of its waters with chemicals from the mining and gas industries. And at least one member said Catholics in general need more education about how “ecological sins” — from littering to large-scale pollution — are sins “against God, against one’s neighbor and against future generations.”

Several synod participants highlighted the need for the church to encourage and support young people, especially as they champion the cause of safeguarding creation, God’s gift to humanity and to future generations.

The Amazon as a “land of migrations” also came up repeatedly as something calling for the church’s response on both a humanitarian and missionary level. People who feel forced to leave their homes because of violence, poverty or a lack of education and opportunity need material aid and support in maintaining their faith and culture.

Throughout the synod, the summaries said, participants called for renewed forms of evangelization and missionary work in ways that respect indigenous culture but share with the people the good news of salvation in Christ.
For more Catholic News Stories on the Amazon Synod see:

God in All Things: Amazon Synod Looks at Indigenous ‘Theology of Creation’

Featured Image: Jesuit Father Alfredo Ferro celebrates Mass in the indigenous community of Nazaret, Colombia. The first week of the Synod of Bishops for the Amazon saw support for the priestly ordination of married indigenous men, impassioned pleas for respect for indigenous culture and denunciations of violence against the Earth. (CNS/David Agren) 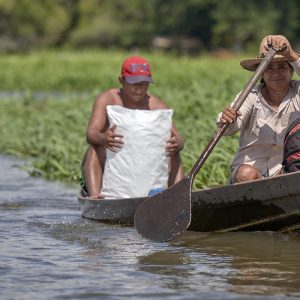 WEB-ONLY FEATURE: Amazon Synod Looks at Indigenous 'Theology of Creation' || By demanding respect for the cultures...