Mother and daughter are missioners
to other migrants in Japan

Maryknoll Father Roberto Rodriguez says he would not be able to do his job without Carmen Muray Ochante and her daughter Rosa Ochante. “They are essential, an extension of what I am as a missioner,” says Father Rodriguez. Carmen and Rosa were among the first parishioners he met when he arrived four years ago as pastor of Infant Jesus parish in Ueno, Japan.

Wilfredo Ochante, Carmen’s husband, was also an essential parish member until his death in 2015.

“They were all committed to the labor of evangelization,” says Father Rodriguez. “Willy was the director of the choir and music ministry. He played and taught children how to play the guitar. Carmen was a catechist, in Spanish, for children.Rosa is a leader in general. They have all contributed their talents to proclaim the word of God.”

Carmen is a Peruvian Nikkei, that is, a descendant of Japanese migrants who settled in Peru. The first Japanese arrived in Peru—the first Latin American country to accept migrants from Japan—in the late 1800s. In the 1980s, Japan—now a developed nation—returned the favor. It changed some of its immigration laws to allow migrants of Japanese descent to Japan. Many Peruvians, like Carmen, took advantage of the opportunity.

Carmen left Peru in 1991, at a time when Peru had a struggling economy and faced terrorism from communist guerrillas. She worked in factories and later petitioned for her husband to come to Japan and eventually for her three children, including Rosa.

“I needed God and found Infant Jesus parish here in Ueno,” says Carmen, recalling her difficulties as an immigrant. “This is my second home.” At the parish, built by Maryknoll missioners over 60 years ago, she put to use her experience as a catechist in her native Lima. She taught catechism in Spanish to immigrant children. But she can’t do that anymore because now children of immigrants speak Japanese.

However, Carmen is still an active parish leader, who continues to be concerned about the children.

“Most children at this parish are migrant children from Peru, Brazil, Vietnam, Bolivia, Kenya, Philippines,” she says. “Here they are learning that we are all brothers and sisters with no colors, flags, races.”

Her daughter Rosa was 10 when her mother left for Japan and 15 when she and her siblings came to Japan to start a new life. She’s been here for 22 years and is now a college professor in Osaka.

“She is a parish leader, a professional, a catechist, she sings in the choir and is a member of the parish advisory board,” says Father Rodriguez of Rosa. “She is a missioner. She is also a member of an NGO that raises funds to bring educational materials to Africa and Peru.”

“I do a little bit of everything,” says Rosa unassumingly. “I help in the music ministry, in the catechesis. I can speak Japanese, so I help translate for the parish’s Japanese community. I speak a little bit of Portuguese with the Brazilian community.”

“We always had a Maryknoll Father with us and having Father Roberto is a special blessing. He speaks our language, Spanish and Portuguese. It is always important to listen to the Word of God in your own language and we are grateful to have Father Roberto,” says Rosa. “We are a multicultural church. We come from different countries, but we form the only one body of Christ.”

Featured Image:Father Roberto Rodriguez and immigrant Catholics in his parish in the Kyoto Diocese. Rosa Ochante is third from left; Carmen Muray is at far right. (Courtesy of R. Rodriguez/Japan)

Recognizing Living Saints Among Us 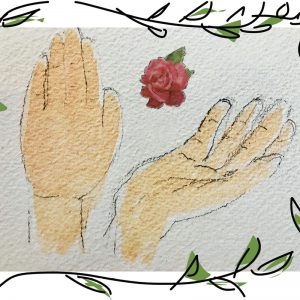 One Family’s Encounter with the Power of Active Nonviolence || The Linns are a remarkable family, who have taught...