Recognizing Living Saints Among Us

The letter to the Hebrews (13:2) admonishes us to “show hospitality to strangers, for by so doing some have entertained angels unawares.” Certainly if we regarded others as angels in disguise, our world would be way more civilized. Our church rightly celebrates saints in ages past, but what about the saints living among us right now?

Would we recognize them? Unlike what we see in holy pictures and stained-glass windows, living saints do not have halos or light around their heads. They do not levitate or have stigmata. Usually they look like ordinary people, yet they reveal God in everyday things and in ordinary ways.

A pious legend tells of a troubled monastery where envy, gossip, jealousy and backbiting were tearing the community apart. In desperation, the abbot asked an elderly hermit, known for his wisdom, to visit and offer advice to resolve their conflict. The hermit agreed to stay with them a week—in silence. After seven days, the abbot asked for the hermit’s assessment. The hermit smiled and whispered, “The Messiah lives among you.” Surprised—to say the least—the abbot conveyed the message to the monks. Immediately the atmosphere improved as everyone treated one another with deference and respect on the chance that that person might be the Messiah in disguise.

Stories of angels unawares, unknown saints, and righteous ones hidden among us inspired me to take another look at the people around me. One, an agnostic, if not an atheist, broke away from our group of friends walking in New York City one hot July day and gave a bottle of cold water to a man sitting with blistered feet on the side of the street. We priestly types, engaged in our own conversation, had failed to even notice the man.

On another occasion, when I was leaving Korea, I told a customs agent that I was leaving most of my friends behind. He immediately closed his window and escorted me to the gate, saying, “I’ll represent your friends.”

And yet another time, I saw a person in line at the grocery store quietly pay the bill for a customer ahead of him who suddenly realized she’d left her wallet home. These simple acts of kindness and courtesy not only make our lives more pleasant and human, but also more blessed.

Isn’t that neighbor a saint who volunteers once a week to watch an Alzheimer’s patient so the spouse can take a much needed day off? Surely the motorist is an angel for forgoing a weekly Starbucks coffee to donate the money to a homeless veteran begging on the same corner day after day. So too is the 5-year-old who donates some of his favorite toys to two children whose home was destroyed in a fire.

In his narrative of the Last Judgment, Jesus has the righteous and the accursed ask the very same question: “Lord, when did we see you?” (Matthew 25:37,44).

Likewise John the Baptist told the crowds, “There is one among you whom you do not recognize” (John 1:26).

As we look at the people around us for signs of living saints, let us also strive to be saints and angels for one another. 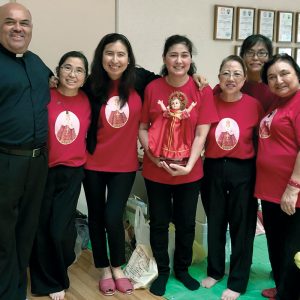 Mother and daughter are missioners to other migrants in Japan || Maryknoll Father Roberto Rodriguez says he would...