I was part of a pastoral team that had the responsibility for the parish of Capinota, Bolivia, which consisted of about 30 villages, many of which were nestled in the thinning air of the Andes Mountains. One day to guide us to the isolated village of Calacaja, the campesinos brought a mule for me to ride up the mountain. At first, riding went fine, but after a while my legs started to hurt. I said I wanted to get off the mule. “No, Sister,” the campesinos said. “You will not be able to breathe.” I kept riding. A while later, legs hurting even more, I again expressed my desire to get off. The answer was politely repeated. Finally, with my aching legs going into spasms, I announced I was getting off the mule. It felt so good, but that joy didn’t last long. With the exertion of walking, I labored to breathe. Embarrassed, I begged to get back onto the mule. The campesinos helped without the slightest hint of “we told you so.”
Joyce Hylazewski, M.M.

I was serving as a deacon in a Chicago parish as I finished my formation before ordination as a Maryknoll priest last June. Part of my service included preaching homilies a few times a month. The first Sunday of Lent I was preaching on the desert experience of Jesus. I connected it to the desert experiences of people in the congregation, from living with physical ailments to gun violence in the neighborhood, while pointing them toward resurrection. Afterwards, one man approached the pastor and told him that his 13-year-old son was accidentally killed by his 14-year-old friend when they were playing with a gun. The boy was hiding in fear. The man said he had intended to find the boy and kill him for what he did, but as he passed the church, he felt a strong pull to go inside. There he heard that he was not alone in his desert experience, and that we are called by the Spirit to keep going toward resurrection and new life. He told the pastor that he had changed his mind about killing the boy. I am learning that you never know when and where God will use you to touch the lives of others.
Jonathan Hill, M.M.

Returning on Ethiopian Airlines to Virginia from my mission in Tanzania, I had asked my mother to pick me up at the airport. I realized en route that I had told her to arrive a day early, not taking into account the time differences. In a time before internet and cell phones, there was no way to inform her. I arrived hoping she would be waiting for me. I was the first to clear customs and come out to the waiting area. There was Mom surrounded by Ethiopian families awaiting their loved ones and all calling out to me, “Hi, Debbie!” Mom had arrived early and befriended the others waiting for the flight. My mom may never have served in overseas mission, but she has the heart of a missioner, open to forming relationships with all people.
Deborah Northern, MKLM

As a Maryknoll lay missioner in Musoma, Tanzania, I work with the Immaculate Heart Sisters of Africa at St. Justin Centre for Children with Disabilities. It’s hard to see children with old sweaters full of holes and ragged shirts. Their shoes too are full of holes. As I looked at their shoes one day, it reminded me of my own growing up. My single and hardworking mother couldn’t afford to buy us shoes. One rainy day I got home with my feet soaking wet because my shoes had holes. When I complained to Mami, she said, “Angelica, be grateful you have feet!” I now spend time with kids who lack feet or have a deformity, and my mother is still reminding me to be grateful for what we have and not to focus on what we lack.
Angelica Ruppe, MKLM

From the Editor: Nowhere to Lay His Head 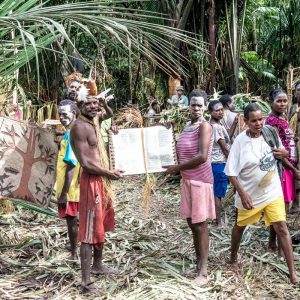 A Maryknoll priest and volunteers work with the Asmat indigenous people in Indonesia || Ever since his arrival 40 years...