Before the crack of dawn, Maryknoll Sister Nena Heramil laces up her blue sneakers and heads to the city’s train station. Her journey involves five transfers, including a train and three buses to the outskirts of Panama City, and then she starts walking uphill. As part of the pastoral social action team at San Juan Maria Bautista Vianney parish, Sister Heramil focuses on improving the living conditions of hundreds of Panamanians in informal settlements around the city.

Today, she is visiting three communities to see people who replaced their precarious houses with concrete ones thanks to one of the team’s projects.

“This has been a blessing,” says Elizabeth Pineda, who migrated from the largely rural province of Veraguas over a decade ago. “Before, our house was made out of wood that was rotten and damaged by the rain.” Once the Pinedas received donated construction materials, they worked with their neighbors to build their new one-room dwelling. “It took us a week to build the little house. Everybody helped,” says Pineda, who is raising three daughters in her new home. 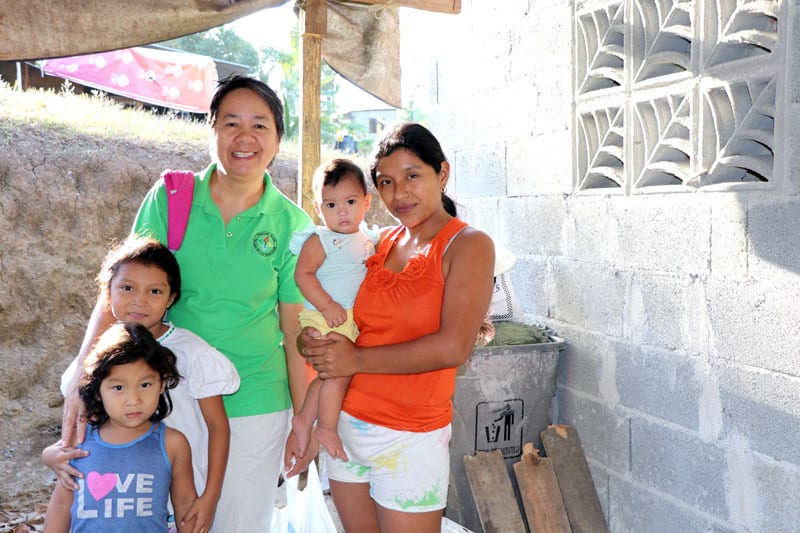 For Elizabeth Pineda, having a solid one-room house for her family has been a blessing
because it means the possibility of a better future for her three daughters. (Maria-Pia Negro Chin/Panama)

Tilsia Gondola, who leads the social action group at Vianney, says the project started in 2013 with a parish census to assess the needs of the communities.“People were concerned about the health of their children because many of the houses are built with materials from the garbage dump, like cartons, plastic, galvanized iron or other materials they can find,” Gondola explains. “We have a rainy climate in this country; the water gets into the houses and children can get skin infections or pulmonary illnesses.”

Pedro Perez, a catechist at San Jose Chapel, which is part of the parish, says houses made of galvanized metal become as hot as ovens under Panama’s tropical sun. “Many of the iron sheets have holes, and when it rains, sometimes there is more water inside than outside,” he says.

Eight of the 32 communities covered by Vianney parish live in extreme poverty, with many residents inhabiting unsafe houses, according to the social action group. After talking to community members, the parish applied for assistance from SELAVIP, an international foundation established by Belgium-born Jesuit Father Josse van der Rest that sponsors community housing projects for poor urban families in Asia, Africa and Latin America. Since the first construction project in 2014, the parish has built 73 one-room houses, with an additional five built thanks to an individual donor. 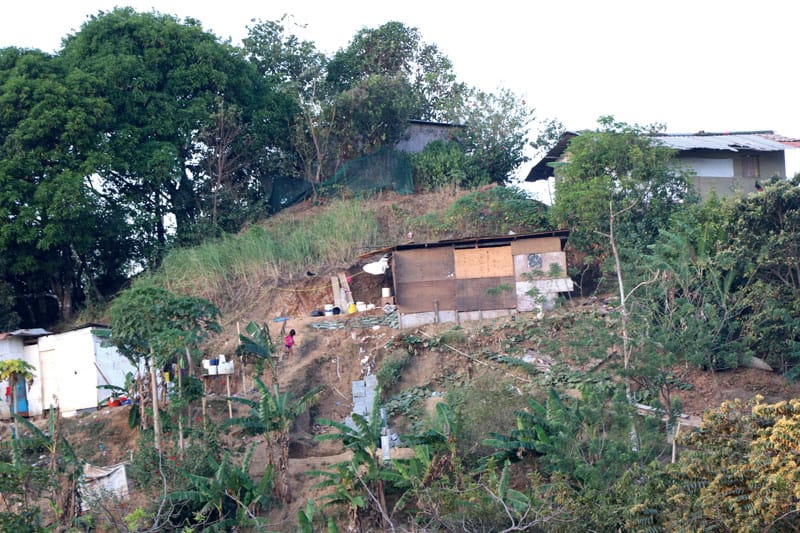 Dwellings like this, made of wood and damaged by the rain, were able to be replaced by concrete one-room homes through a project of the social action team of Vianney parish. (Maria-Pia Negro Chin/Panama)

SELAVIP covers the cost of the construction materials so that a family with small children can build a 172-square-foot (16-square-meter) one-room house. Beneficiaries call these rooms casitas or little houses. The parish helps to cover the other costs and the families build the houses themselves with the help of a local mason. The social action group hopes to build another 51 casitas in 2020, Sister Heramil says.

“The children are so happy that they are sleeping in a house, that they have a safe place where they can sleep,” says Sister Heramil. “People are grateful for the help; you can see it in their eyes, their smiles.”

The missioner says the chance to be part of this project transforms the people’s lives. “We not only give them materials but prepare them to know how to live well,” she says. The families participate in parish-sponsored workshops, covering topics such as safety, sanitation, nutrition and health, she says.

“The idea is not only to build a house but to build them up as people, to give them the tools so they can improve their way of life,” adds Gondola about the project’s aim.

John González and Emliana Arroyo, who recently received approval to build their cement house, showed Sister Heramil where they plan to build the new casita for their three children. “I am grateful for this help,” Emliana says. “I hope the Lord gives (the social action team) the strength to continue to support families of humble means so that they can have a better future.” 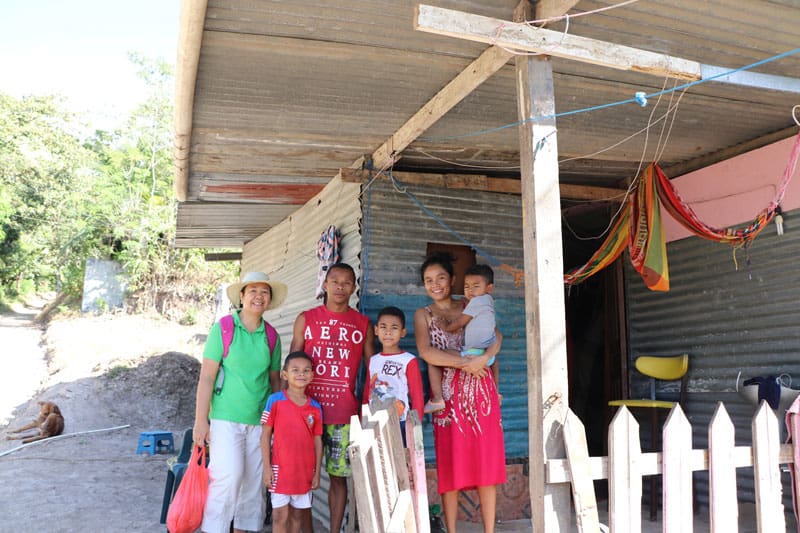 John González and Emliana Arroyo, recently received approval to build their cement house, for their three children to have a better life. (Maria-Pia Negro Chin/Panama)

Sister Heramil seems to have that strength. Her work doesn’t stop when a new house is built. She is devoted to visiting families in need, both housing recipients and others, and evaluating how the social action team can help.

“She climbs up those hills and gets to know the people,” Gondola says. “She has been able to do what we couldn’t, due to her perseverance and constant involvement with the communities.”

Sister Heramil, 56, grew up on the island of Samal in the Philippines and in 1985 joined the Teresian Daughters of Mary, a Philippine religious congregation. She served mostly as a school administrator. Moved by the Holy Spirit to do cross-cultural mission, she says, she transferred to the Maryknoll Sisters in 2010, and made her incorporation of vows in 2015. She was sent to Bolivia, where she studied Spanish and worked in an after-school program for at-risk children. 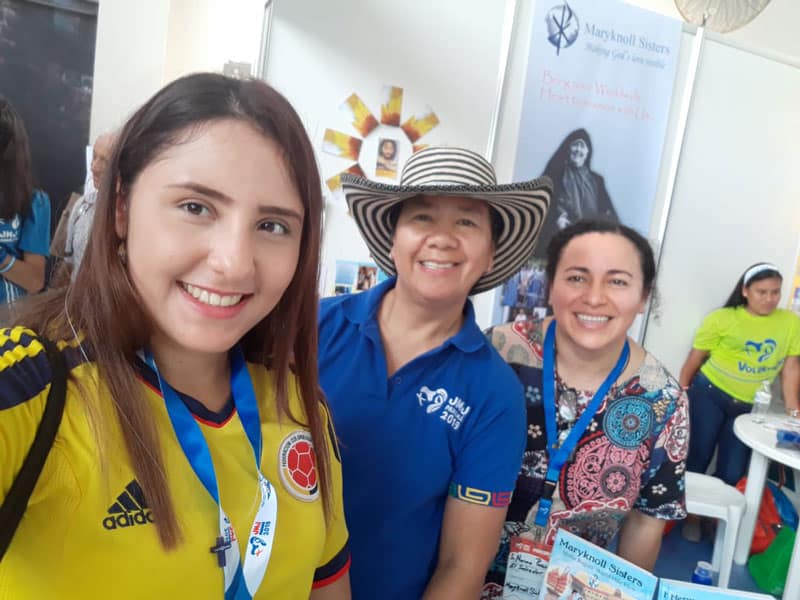 In 2016, Sister Heramil was assigned to Panama, where she chose a ministry working with the social action group at Vianney. “The work that I do is really to be with the people, visiting the families and is just hearing their stories,” she says. Her work includes visiting sick parishioners every Friday and helping distribute much-needed food to poor families and the elderly twice a month.

But there is still much to do, she adds. Most families in the communities she serves are indigenous people or farmers who come from the provinces seeking a better life, only to find more poverty, unemployment, malnutrition and a lack of educational opportunities for their children. These families live in areas that are hardest to access, such as on hills and in ravines, where they often lack access to water and electricity and transportation. 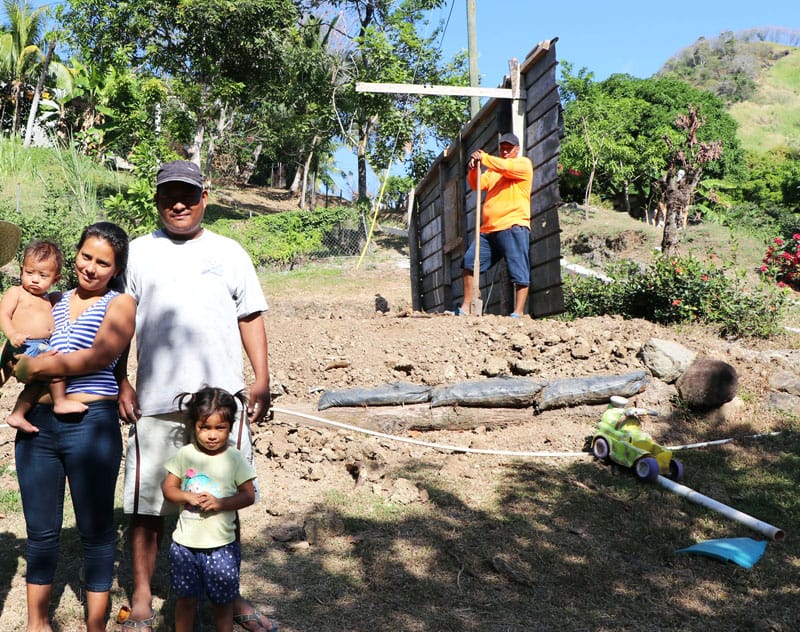 The Franco family shows the sister Heramil the land where. They will build their new house. (Maria-Pia Negro Chin/Panama)

Gondola says the social action team hopes to help families to start home gardens so they can improve their nutrition and supplement their income. Team members also plan to work with the parish ecology ministry to improve access to water. Another initiative is to teach women in the area to make arts and crafts to sell locally. Sister Heramil hopes these initiatives, along with the housing project, will help families embrace their futures with dignity.

Briceida Duarte expresses the joy of those who have received help building a new, solid home. “I am happy because now we have something that we own and we can leave to our children,” she says. “I give thanks to God and to everyone who is helping with the project.” 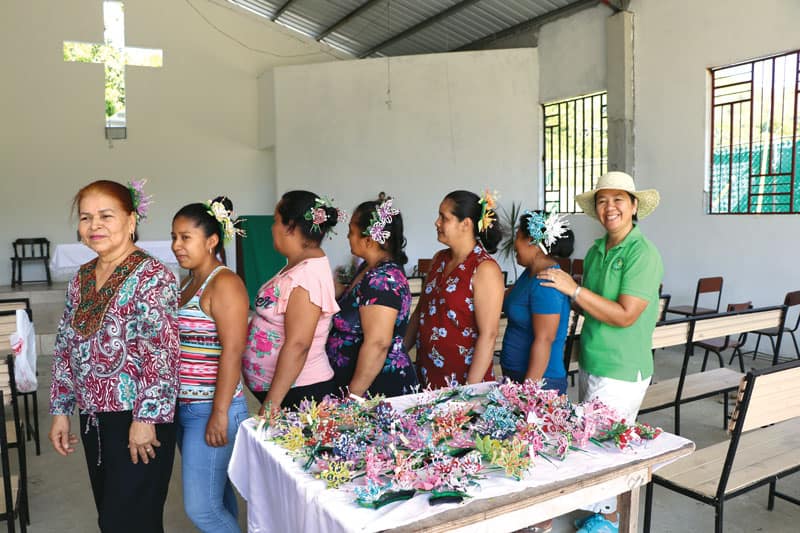 Women from the community of Vallecito show handicrafts they learned to make to sell locally. (Maria-Pia Negro Chin/Panama)

Walking with the Homeless 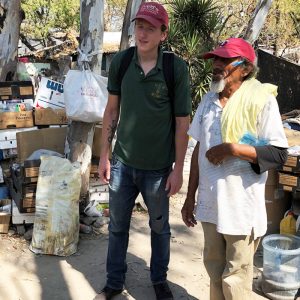