Walking with the Homeless

You could say I’m geographically disabled,” says Athena, a 40-something African-American with blonde hair. “That means I’m homeless. I have been sleeping outside for about six years. There was a bad incident, which kind of snowballed, and now my kids are living with my mom.”

Mike, a jittery 34-year-old, is also homeless and finding it hard to adjust to life outside of prison. “I just got out,” he says. “I was in for a year, and I don’t know how to act. I don’t know how to respond to normal society. It’s harder on the outside; in prison it’s all organized.”

Lonny is a soft-spoken 58-year-old man who worked 37 years for three different companies until he became addicted to painkillers. That led to heroin addiction and to becoming homeless. Now he lives in his car. “I have been in treatment, got off the heroin and now trying to get into housing,” he says. 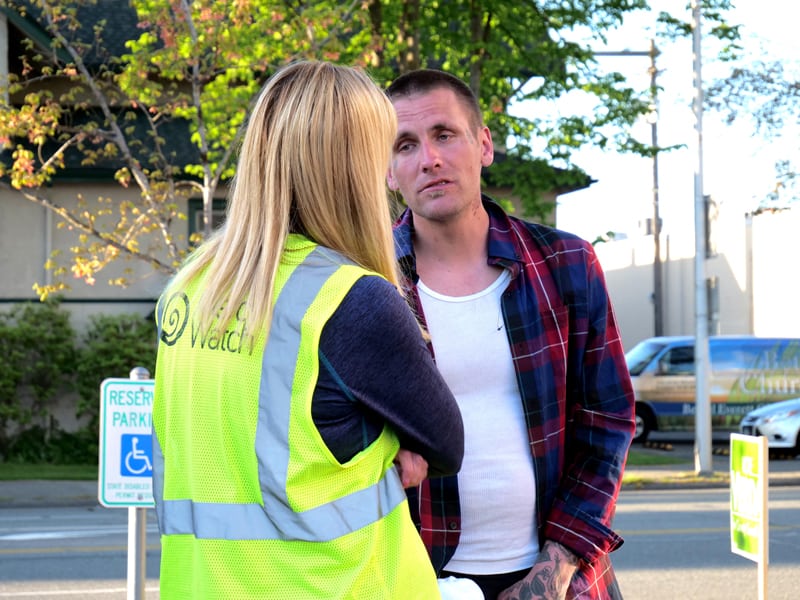 Mike, a homeless man in Everett, Wash., listens to advise from a volunteer at MercyWatch, a Catholic charity that provides help to those living on the street. (Peter Saunders/U.S.)

These three people, along with 40 to 60 other homeless people, turned up on a Tuesday evening, as they do most weeks, at a parking lot outside the public library in Everett in Snohomish County, Wash. The prosperous city of slightly more than 100,000 people on Puget Sound just north of Seattle is best known for its Boeing aircraft factories, where employees earn six-figure salaries and live in neat, sometimes palatial, houses with well-kept gardens. In contrast, an estimated 1,000 people in the county are homeless.

Many of the homeless are destitute, and a sizable minority are addicted to drugs and alcohol. Some of them sleep under bridges and some in their cars, while others stay in emergency shelters or in transitional housing. More than half a million people are homeless in the United States, according to the U.S. Department of Housing and Urban Development’s figures for 2018.

Worldwide, the United Nations estimates between 100 million to 150 million people are homeless, while as many as 1.6 billion people, 20 percent of the global population, lack adequate housing. 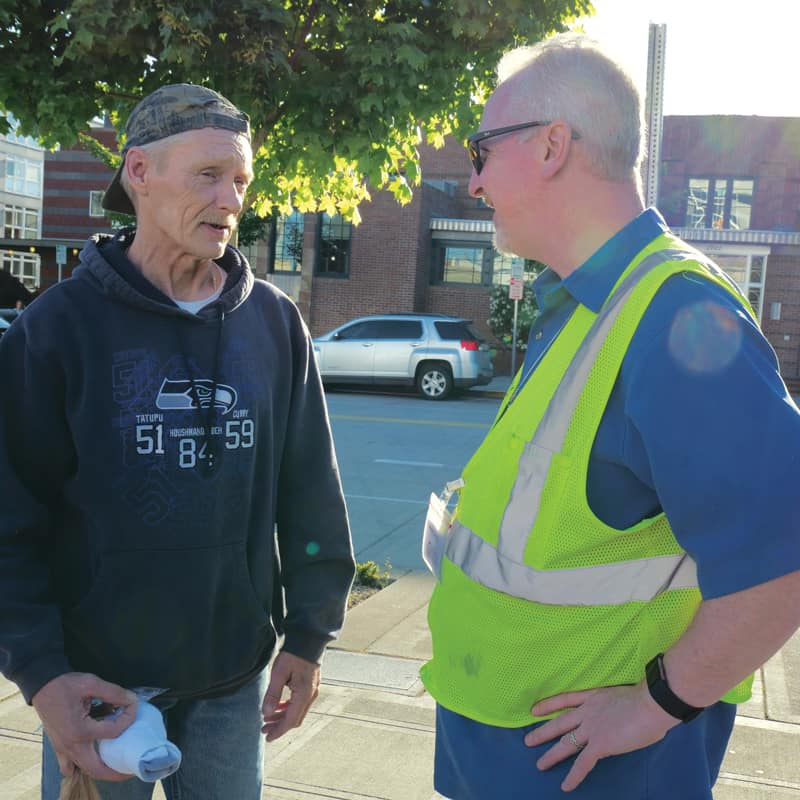 Helping to ease their pain at the Everett parking lot is MercyWatch, an independent Catholic charity that cares for the homeless in Everett. With a faith-inspired team of volunteers that includes doctors, nurses, social workers and others who just want to help, MercyWatch comes twice a week to provide sustenance, street medicine and prayer to those in need.

“Our aim is to create a circle of care around people who are homeless,” says Deacon Dennis Kelly, the executive director of MercyWatch, who started the non-profit organization in 2016 along with a team of volunteers. He is also an active member of the Maryknoll Deacon Mission Partners, and credits the mission society with setting his life on the direction it has now.

“God called me to Maryknoll,” he says, explaining that he joined a Maryknoll immersion trip to Central America in 2013, shortly after his ordination as a deacon.

“There I had a metanoia (conversion) experience and heard God’s call to leave behind a lucrative professional career to concentrate on full-time ministry. Maryknoll changed my life forever.” 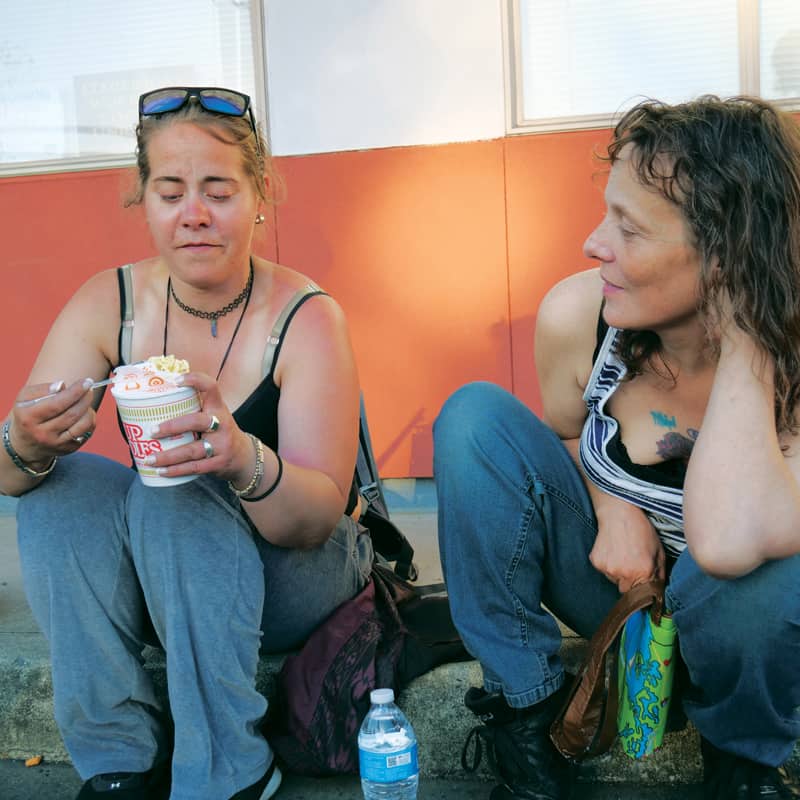 On a recent evening, in the light of the late-day sun, the homeless were in good moods, grateful for the cup of soup, drinks, blankets and socks that were being handed out, along with rosaries and an abundance of prayer. Some of the homeless were treated on the spot for minor injuries and ailments.

“It’s always a joy to show God’s love to those in need and I think it’s a real privilege that they trust us,” says Dr. Jimmy Grierson, a family medicine physician.

“Tonight, I treated a man with an abscess and consulted another who was worried about catching HIV from a needle prick,” Grierson says. “Another guy cycled over to show me how well his infected finger had healed since we last saw him. Asking nothing in return, we see people in homeless camps and missions and on the street and try to touch people one by one just like Jesus did.” 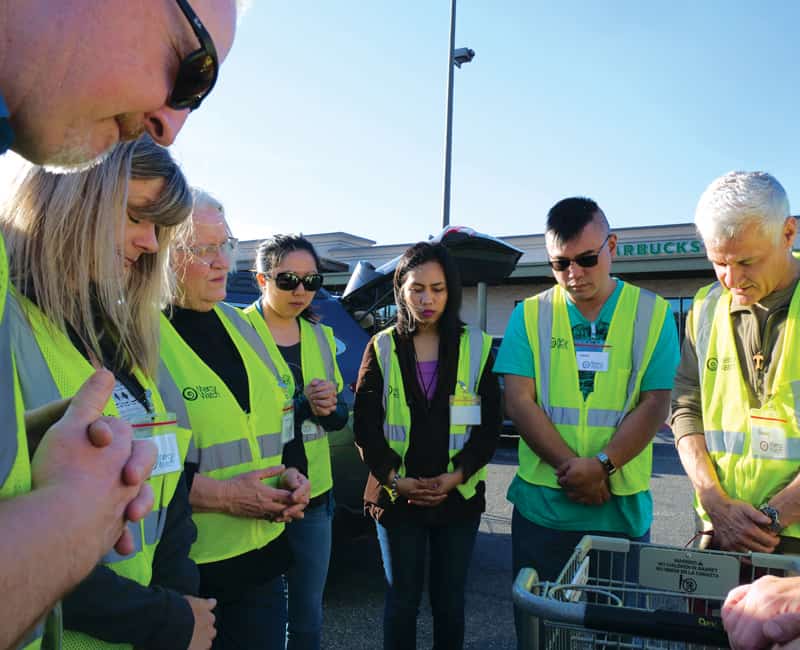 MercyWatch volunteers in Everett, Wash., stop to pray together before they work with the homeless. (Peter Saunders/U.S.)

Jennifer Olszewski, who works at Boeing, is a MercyWatch volunteer with a mile-wide smile. She was dispensing prayer. She says the homeless often ask why she does this.

“Because you are my brother and I love you,” she says. “This is extremely powerful. I want people to realize, disadvantaged as they are, that they are valuable. Before we go out, we have a little prayer and ask God to send us to the people who need us most. It is challenging but very rewarding.”

“I think every human heart is wired with the desire to do something impactful and to give something back,” says Deacon Kelly, who had a successful career in broadcast journalism for his “first half-life,” until he received the calling to change direction and began working with the homeless.

With medical attention for the poor so hard to come by in the United States, Deacon Kelly says it was especially important to cater to that specific need. Today, MercyWatch has over 200 volunteers, seven organized street medicine clinics and nightly outreach to the homeless on the street, he says.

“We go out as a team on Tuesdays and Thursdays from 6 to 9 p.m. for our street clinics, where some true medicine is happening,” he says. “We treat them from our cars.” 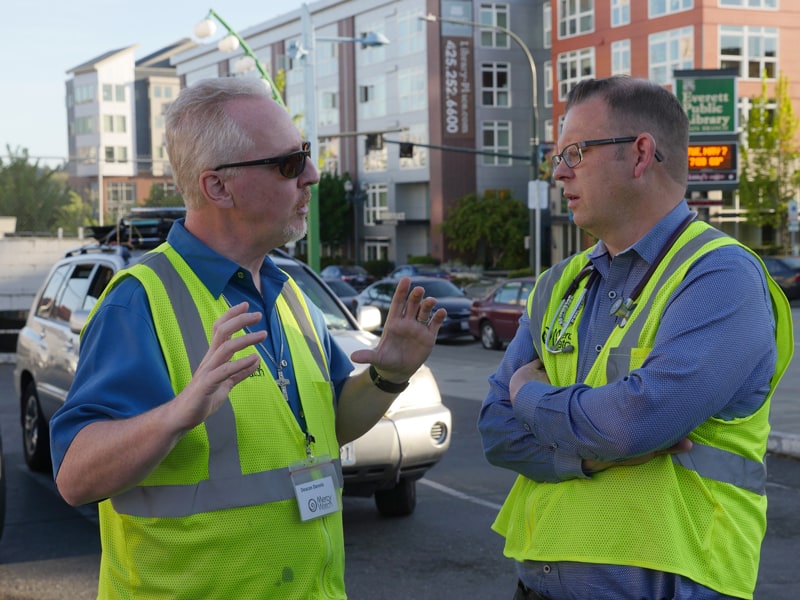 At the separately run Everett Gospel Mission Center, homeless people can relax in a large hall and outside on a terrace, while two doctors and a nurse on hand see patients. Upstairs, a huge dormitory can sleep 150 homeless men for the night. The facility also has a shelter for women and children. One requirement is that they must not be on drugs or alcohol at the center.

“Serving as volunteer executive director (of MercyWatch) has become a beloved part-time endeavor,” Deacon Kelly says. “I marvel at how the Spirit moves in our lives and guides us closer to Christ.”

MercyWatch volunteers strive to get to know the homeless as human beings, he says. “What you find is some form of trauma happened in their life that has brought them to the point where they are. By getting to know them on a personal level and understanding their trauma, you start to unravel why this person is showing this behavior and why they are doing what they’re doing.”

On the street outside the Gospel Mission, the team encountered a distraught homeless woman high on drugs. She had some minor abrasions, which they treated. Deacon Kelly noted she had no shoes, so he went to his car, with its license plate that reads LOVE U2, to see if he could find some. He wasn’t expecting it, but there was a pair of white sneakers in her exact size.

“How did they get there?” he asked himself bemused. “God’s fingerprints are all over it.”

Featured Image: A homeless man in Everett, Wash., wanders the streets with his personal possessions in a shopping cart. (Peter Saunders/U.S.) 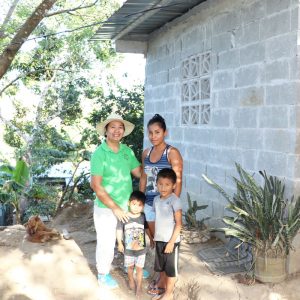 A Maryknoll sister helps families go from shaky shacks to solid houses || Before the crack of dawn, Maryknoll Sister...