On a Friday night, a basement on the South Side of Chicago fills up with a dozen teenagers. As people start to pray the rosary in front of a makeshift shrine to Our Lady of Guadalupe, the teens playing soccer outside come inside to join them.

The teens call themselves Guerreros de Paz (Warriors of Peace), and they are part of a ministry that seeks to provide them with a safe and welcoming space where they can grow in their faith. Gathered in the basement of St. Gall parish in the neighborhood of Gage Park, they talk about Isaiah and Jeremiah, two prophets who said yes to God’s call. There will also be more prayer, games and laughter among friends.

“We meet every Friday to try to inspire and move hearts with the grace of God,” says Alberto Rodríguez, 25, who helped to found this ministry in 2016. “Our vision is to inspire our youth in the neighborhood, so they can be leaders like Christ and to love like Christ.” 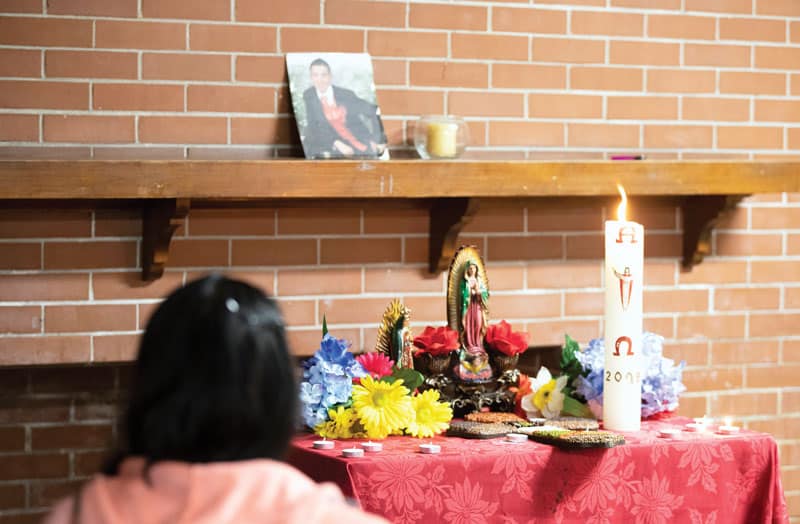 Prayer is a key component for the Peace Warriors group that meets every Friday in the basement of St. Gall’s parish in Chicago. (Octavio Durán / Illinois)

During their weekly meetings at St. Gall, a predominantly Hispanic parish, young adult mentors and teens, ages 13–17, discuss issues that affect them, such as peer pressure, immigration, family issues, the lure of drugs and gang-related violence. The meetings also center on prayer, Bible reading, music and bonding activities. Most of all, this is a space of encounter with Jesus.

Leaders explain that often youth and young adults living in these neighborhoods of Chicago lack spaces where they can express themselves without feeling judged. For Jacqueline Perez, 20, feeling welcomed by the group and finding a sense of community saved her. “As a young girl, I was lost,” she says. “If it were not for them, I would not be able to be part of this world anymore because I was in such a dark place at the time. But being able to learn about God and feel Him present in my life helped me.”

“People may see a basement with teenagers hanging out, but this is a basement filled with hope,” says Marie Ramirez, 30, a leader for Warriors of Peace. “You don’t waste time with youth; you are always planting a seed… We let them know that they have dignity, that they are respected and loved and seen by God.” 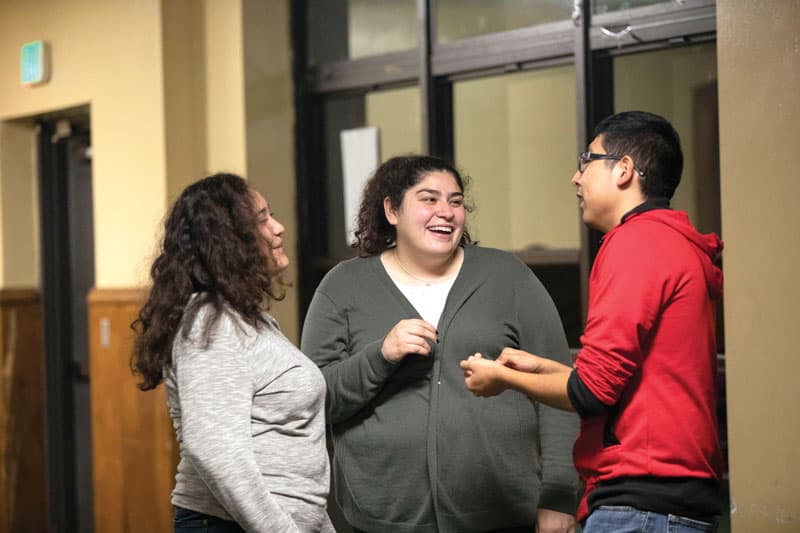 Last October, the young leaders chose “mission” as their monthly topic to encourage teens to reflect on their vocation and to take the first step in their missionary journey. “We are preparing our youth with a three-part series: the calling, the answer and the sending,” explains Daniella Cruz, 19.

“Young people want to be a part of the social change, social impact. They want to make a difference and serve others,” says Jorge Rivera, a Maryknoll mission educator who seeks to promote a culture of mission among young people across 29 dioceses in the Midwest. He was one of the guests at the Warriors of Peace meetings in October. “One of their greatest needs is to feel like they are part of the Church,” where they can serve, lead and form communities centered in Christ, he adds.

Before their meeting, Daniella Cruz and other young leaders, who are called “servers,” met to ensure that younger youth can find God’s calling amid their struggles. “Without volunteers, (Warriors of Peace) would not be possible,” says Rodriguez, a full-time college student and a part-time community coordinator with Sinai Health Systems in Chicago.

Despite having jobs as teachers, counselors and students, the young adults spent an evening working out the details of their upcoming meeting. They chose biblical stories, games and a prayer activity, where the leaders would share their vocation stories. 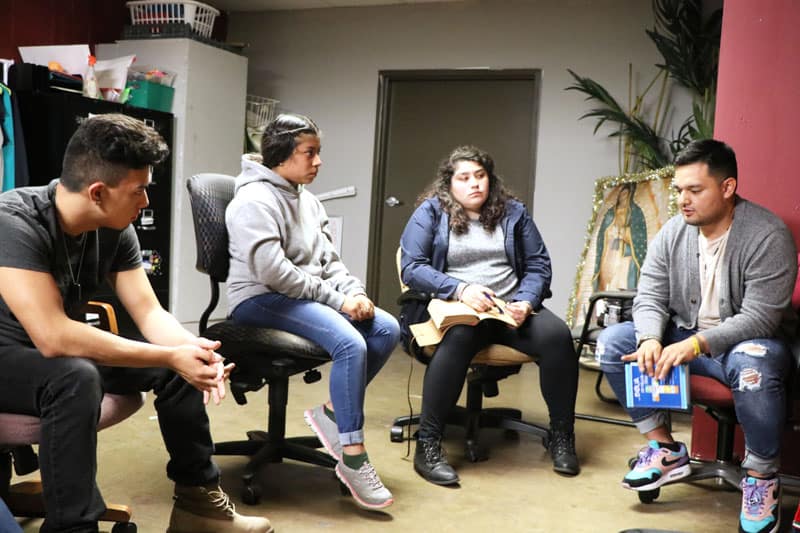 During the Extraordinary Month of Mission in October 2019, young adults spent an evening planning how to talk to teenagers about responding to God’s call. (Maria-Pia Negro Chin/U.S.)

“We want them to know that whatever they have seen in the neighborhood, those struggles can empower them to bring about the Kingdom of God,” Rodriguez says. “Whatever their history or past or present, that itself can inspire them to become missionary disciples.”

That respect for the teens’ experiences encapsulates the spirit of Warriors of Peace. Respect, combined with faith and a determination to help teens grow in their understanding of God’s love, is what creates a sense of community. “Kids or teenagers might feel like nobody can understand them, but here they can be understood,” says Richard Magaña, 17.

Two years ago, Michelle Enriquez, 17, was forced by her parents to attend the Warriors of Peace meetings and went with an attitude, she says, because she was going through a rough time at home. But talking to the servers and their peers, she realized she was not alone. “I started slowly trusting them because they were always there for me, and they always checked up on me,” Enriquez says, adding that her peers kept what she shared confidential. They show her God’s love through their actions, she adds. “I feel like Guerreros de Paz is my second home… If I did not come here, I would not be on the right path, and I would not be growing as a person.” 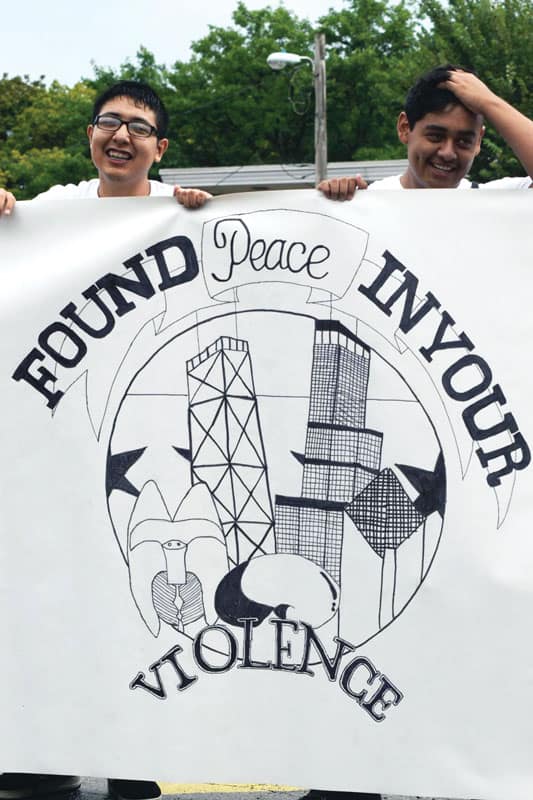 Guerreros de Paz/Warriors of Peace participated in a march for peace in 2018, carrying banners promoting non-violence in their community. (Brian Treviño / Illinois)

Warriors of Peace also stands up to violence in this under-resourced community. The St. Gall young adults work with nearby parishes to organize peace marches in honor of a classmate killed by gun violence in 2017. “He was a kind, genuine person who has inspired us to do what we do: to bring more youth closer to God and their purpose and calling,” Rodriguez says.

During the Friday meeting, Rodriguez spoke of his call, explaining that his parents migrated from Mexico in 1993 and went to Chicago, where they first worked at a factory. They lived in La Villita (Little Village) in South Lawndale for 11 years, at a time when gangs were fighting for territory. His father later worked at a mechanic shop and eventually was able to open his own shop. “In 25 years, I never went hungry because of the hard work of my dad,” Rodriguez told the teens at St. Gall. “How can I not be brave to say yes to God’s calling if I’ve seen the worst of the worst in life, and yet we have so many blessings?” 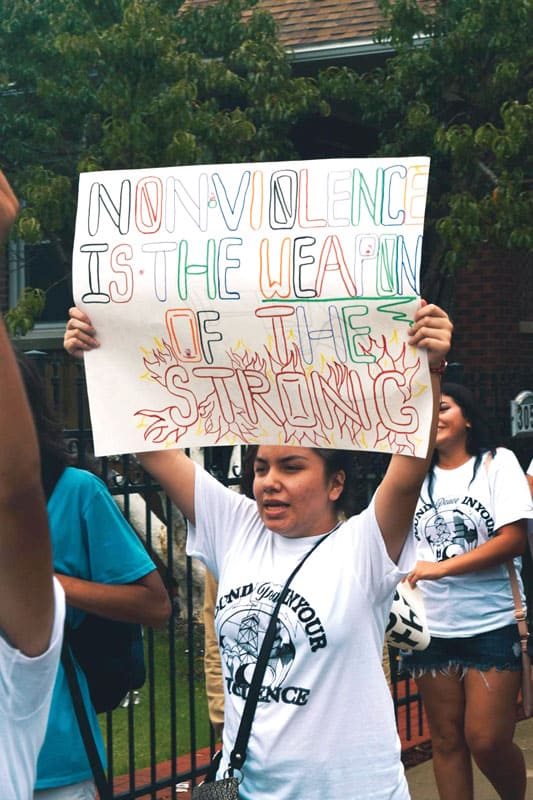 Janet Morado was among the youth who marched for peace around the neighborhood of Gage Park in 2018. Morado spoke about nonviolence in Chicago. (Brian Treviño/U.S.)

Hearing the young adults share their testimonies encouraged young people. “Tonight’s tema (topic) was very inspiring because they told us not only to be ready but to be brave to receive God’s mission,” says George Alvarez, 16. “I feel like God has been calling me to help not only the community but at my own house.”

Eighth-grader, Celena Garcia Avalos, 13, says that reflecting on how prophets Jeremiah and Isaiah reacted to God’s call was eye-opening. “One was still doubtful and thought he was too young, while the other said ‘send me’ right away,” she explains. “Everybody can respond in different ways and at different times.” 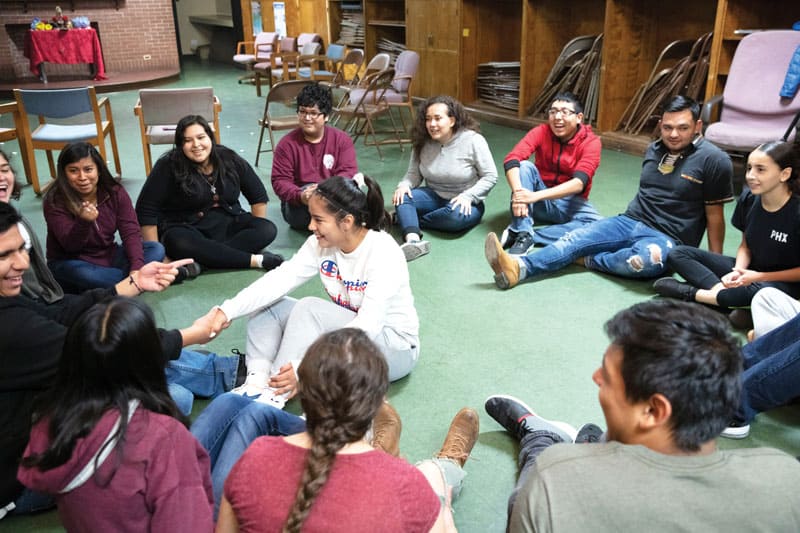 Teens and young adults participate in a dynamic during the weekly meeting of the Warriors of Peace group in the parish of St. Gall. (Octavio Durán / Illinois)

The young leaders of Gage Park continue to respond to their calling to share God’s hope.

Juan Pablo Padilla, the coordinator of Pastoral Juvenil Hispana and Youth and Young Adult Ministry in the Chicago Archdiocese, says that young people are seeking mentorship, support and trust to bring about the best in their leadership abilities. He and Rivera accompany young people offering guidance so they can meet their needs. 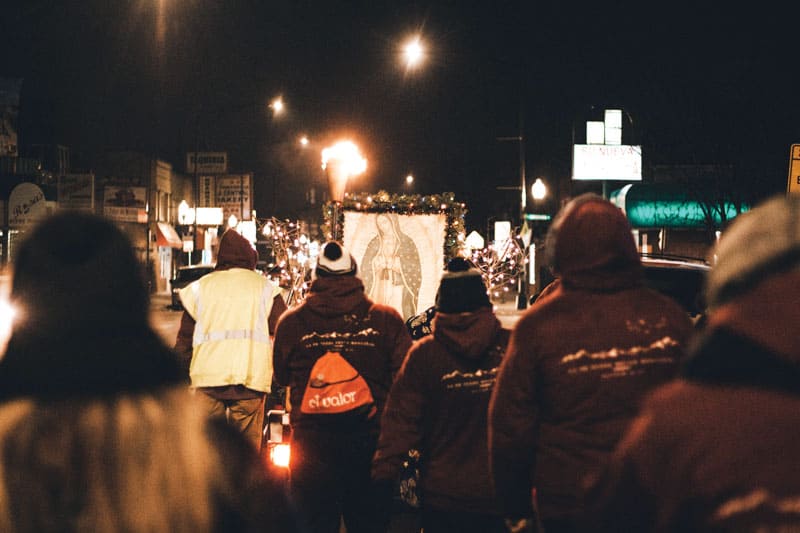 “Our main responsibility is formation,” Padilla says. “It’s helping prepare our leaders, our young adult ministers, youth ministers to the capacity of being able to be pastoral agents and leaders.”

At the end of October, the teens were sent forth to serve others. That night, members of Warriors of Peace approached the custodians at St. Gall and offered to clean the church. Later, 20 teens went around Chicago to hand out food to the homeless. “We are looking to do things that require us to step out of our comfort zone,” says St. Gall parishioner Maria Tatiana Aranda, 26, a leader who through volunteering found her purpose and now works at the archdiocesan young adult’s engagement office.

Ministries like Warriors of Peace matter, says Rivera. “These young people bring such a gift to the Church and also to society,” he says. With the accompaniment and support of the archdiocese, he believes they can help lead the Church.

Hear the speech that Janet Morado, a Warrior of Peace leader, wrote for one of the peace marches around her community: 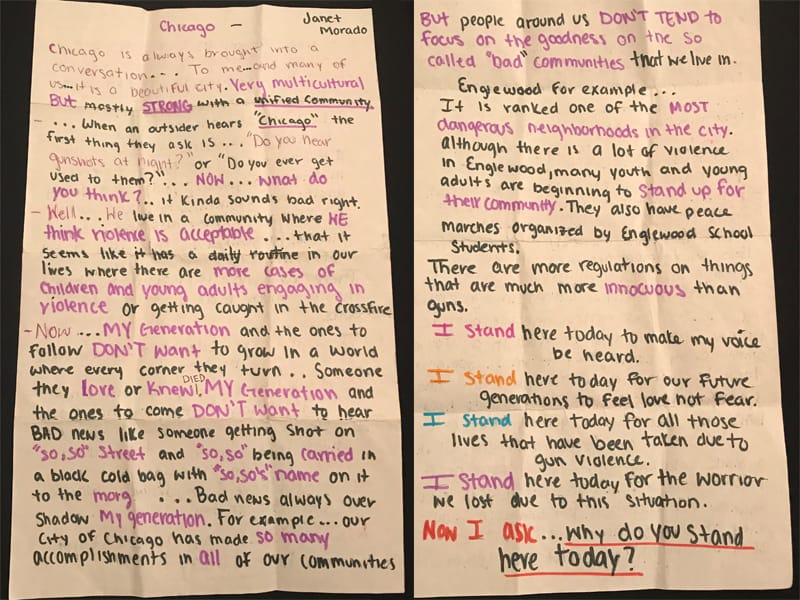 Janet Morado, 17, is an example of the impact Warrior of Peace’s leaders have on the young people they mentor. She went from being a timid teen to blooming into a powerful young leader. Here is her testimony about sowing peace in her community.

Featured Image: A group of teenagers and young adults meets at St. Gall parish to reflect on their mission in today’s world. (Octavio Duran /U.S.)

Many Faces of Mission in Chicago 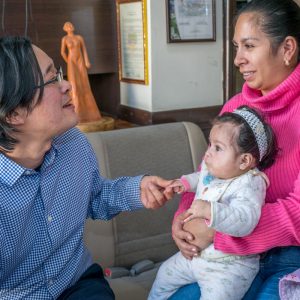 Mar 1, 2020
Copyright 2020 Maryknoll Fathers and Brothers. All Right Reserved.
Back to top