" /> Church Must Recognize the Gifts of Elderly Catholics, Pope Says

Church Must Recognize the Gifts of Older Catholics, Pope Says

A Vatican conference discussed the gifts elderly Catholics bring to the church, as well as their special needs.

VATICAN CITY (CNS) — Old age “is not a disease, it’s a privilege,” and Catholic dioceses and parishes miss a huge and growing resource if they ignore their senior members, Pope Francis said.

“We must change our pastoral routines to respond to the presence of so many older people in our families and communities,” the pope told Catholic seniors and pastoral workers from around the world.

Pope Francis addressed the group Jan. 31 near the end of a three-day conference on the pastoral care of the elderly sponsored by the Vatican Dicastery for Laity, the Family and Life.

The Catholic Church at every level, he said, must respond to the longer life expectancies and changing demographics evident around the world.

While some people see retirement as marking the time when productivity and strength decline, the 83-year-old pope said, for others it is a time when they are still physically fit and mentally sharp but have much more freedom than they had when they were working and raising a family.

In both situations, he said, the church must be there to offer a helping hand if needed, benefit from the gifts of the elderly and work to counter social attitudes that see the old as useless burdens on a community.

When speaking with and about older Catholics, the church cannot act as if their lives only had a past, “a musty archive,” he said. “No. The Lord also can and wants to write new pages with them, pages of holiness, service and prayer.”

“Today I want to tell you that the elderly are the present and tomorrow of the church,” he said. “Yes, they are also the future of a church, which, together with young people, prophesies and dreams. That is why it is so important that the old and the young talk to each other. It is so important.” 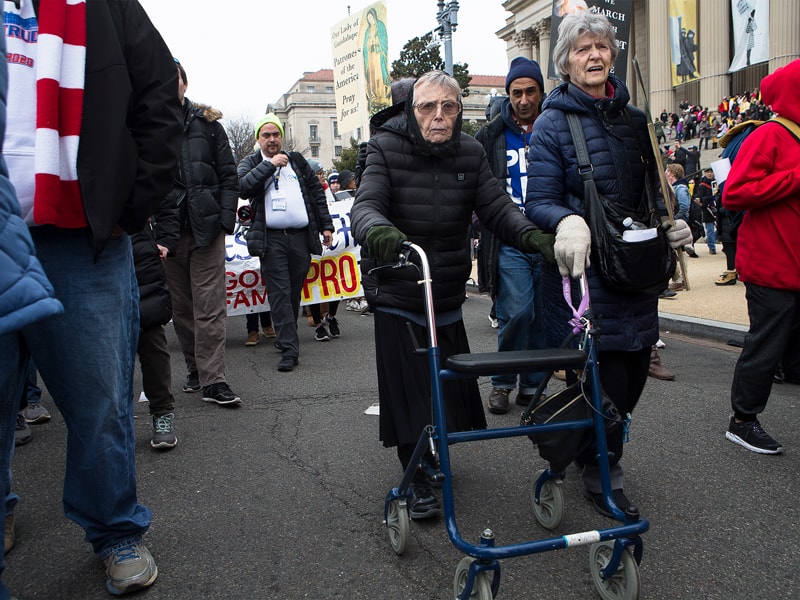 An elderly woman participates in the 47th annual March for Life in Washington Jan. 24, 2020. Pope Francis told told Catholic seniors and pastoral workers from around the world Jan. 31 that old age “is not a disease, it’s a privilege,” and Catholic dioceses and parishes miss a huge and growing resource if they ignore their senior members. (CNS photo/Tyler Orsburn)

“In the Bible, longevity is a blessing,” the pope noted. It is a time to face one’s fragility and to recognize how reciprocal love and care within a family really are.

“Giving long life, God the father gives time to deepen one’s awareness of him and to deepen intimacy with him, to draw closer to his heart and abandon oneself to him,” the pope said. “It is a time to prepare to consign our spirit into his hands, definitively, with the trust of children. But it also is a time of renewed fruitfulness.”

In fact, the Vatican conference, “The Richness of Many Years of Life,” spent almost as much time discussing the gifts older Catholics bring to the church as it did talking about their special needs.

The conference discussion, the pope said, cannot be an “isolated initiative” but must continue at the national, diocesan and parish levels.

The church, he said, is supposed to be the place “where the different generations are called to share God’s loving plan.”

Just a few days before the feast of the Presentation of the Lord Feb. 2, Pope Francis pointed to the story of the elderly Simeon and Anna who are in the Temple, take the 40-day-old Jesus into their arms, recognize him as the Messiah and “proclaim the revolution of tenderness.”

One message of that story is that the good news of salvation in Christ is meant for all people of all ages, he said. “So, I ask you, spare no effort in proclaiming the Gospel to grandparents and the elderly. Go out to meet them with a smile on your face and the Gospel in your hands. Leave your parishes and go seek out the elderly who live alone.”

While aging is not a disease, “solitude can be an illness,” he said. “But with charity, closeness and spiritual comfort, we can cure it.”

Pope Francis also asked pastors to keep in mind that while many parents today do not have the religious formation, education or drive to teach their children the Catholic faith, many grandparents do. “They are an indispensable link in educating littles ones and young people in the faith.”

The elderly, he said, “are not only people we are called to assist and to protect in order to safeguard their lives, but they can be protagonists of evangelization, privileged witnesses of God’s faithful love.”

Featured Image: Pope Francis delivers his blessing during an audience with seniors and pastoral workers from around the world at the Vatican Jan. 31, 2020. The pope said old age is not a disease but a privilege. (CNS photo/Vatican Media) 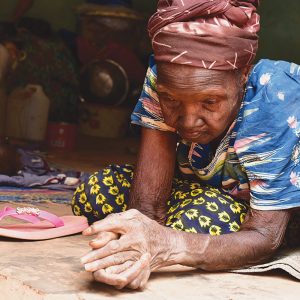 Abandonment was the most unbearable pain Jesus felt while hanging on the cross || Every year when those ads come on TV to adopt...