LIMA, Peru (CNS) — Saying the world has much to learn from Amazonian indigenous peoples, Pope Francis declared the Catholic Church their ally in their struggle to protect the region’s forests and rivers.

In “Querida Amazonia” (Beloved Amazonia), the apostolic exhortation issued Feb. 12, the pope called on Catholics to respond to environmental destruction in the Amazon region with outrage and indignation while building networks of solidarity with its traditional inhabitants.

The document is Pope Francis’ response to recommendations made by participants in the Synod of Bishops for the Amazon, held in October 2019 at the Vatican.

With its often lyrical language, the exhortation takes another step toward a closer relationship with native peoples, which the pope launched in Peru in January 2017. At an encounter there with several thousand Amazonian indigenous people, Pope Francis asked his listeners to help church leaders understand their culture and their lives.

With the exhortation, the pope has made it clear that the church — and the world — must listen to them and recognize them as equals, said Moema Maria Marques de Miranda, a lay Franciscan who was an observer at the synod.

“After 500 years, indigenous peoples are recognized in their wisdom and their abilities. That is a paradigm change,” Miranda told Catholic News Service. 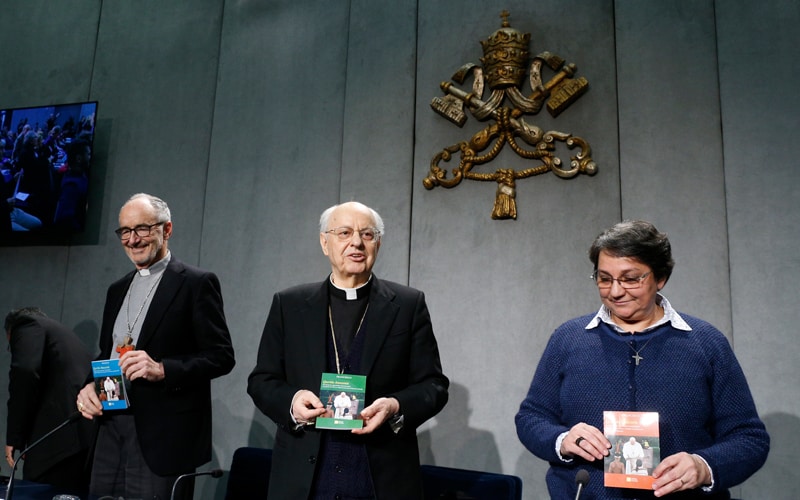 Cardinal Michael Czerny, Cardinal Lorenzo Baldisseri, and Sister Augusta de Oliveira hold copies of Pope Francis’ apostolic exhortation, “Querida Amazonia” (Beloved Amazonia), during its release at a news conference at the Vatican Feb. 12, 2020. The document contains the pope’s conclusions from the 2019 Synod of Bishops for the Amazon. (CNS photo/Paul Haring)

That image of dreams has a double meaning. For most Westerners, dreams express hopes for the future, but for indigenous people, they transmit messages from God, just as they did for some Biblical figures, Miranda said.

Such dreams are visions “that connect with something very deep within the person,” said Medical Mission Sister Birgit Weiler, who works in Peru and was an expert at the synod. “It commits you to taking a new path.”

One message that stands out clearly in the exhortation, she said, is that the church sides with indigenous people who defend their lands against extractive industries like logging and mining or the encroachment of industrial-scale farming and ranching. 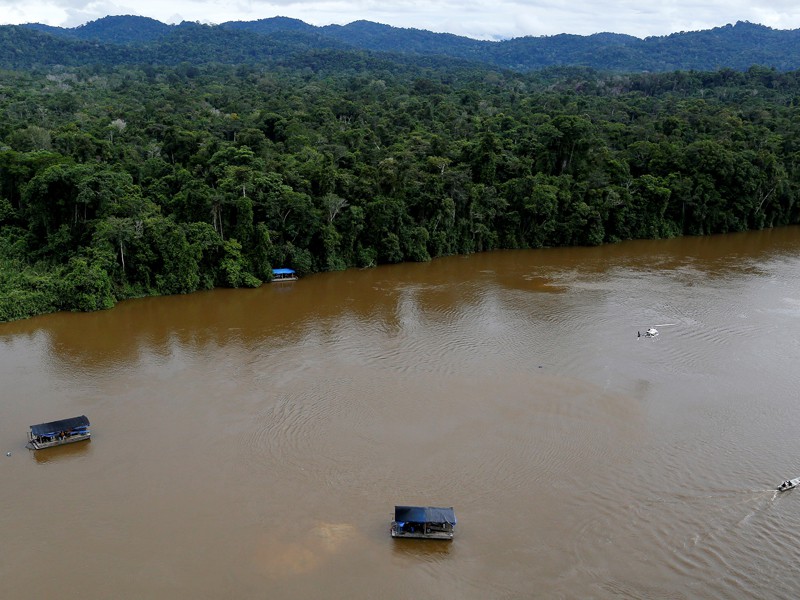 A gold dredge is seen at the banks of Uraricoera River during Brazil’s environmental agency operation against illegal gold mining on indigenous land, in the heart of the Amazon rainforest, April 15, 2016. (CNS photo/Bruno Kelly, Reuters)

That is also a sign the church workers “have the backing of the pope” when they accompany communities in those struggles, she said. Such efforts sometimes draw criticism from others in the church, but the pope has made clear that “they can’t call you communist” for opposing industries or infrastructure projects that threaten communities, she said.

The exhortation “is a response from Pope Francis to the cry of pain of the Amazon, from its peoples, nations and indigenous organizations, Jose Gregorio Diaz Mirabal, coordinator of an umbrella organization of Amazonian indigenous groups, said in a statement released Feb. 12.

“These represent powerful words of understanding, solidarity and a commitment to stand with us against the pain, murders and criminal prosecution of the unique and legitimate defenders of the Pachamama” or Mother Earth, Diaz, who was an observer at the synod, said in the statement.

Pope Francis’ message comes as threats against the environment and those who defend it are on the rise in Amazonia and other parts of Latin America and the world.

Widespread fires in southern Brazil and northern Bolivia, where forests were razed for farming and ranching, made international headlines in 2019. Africa’s Congo basin, which faces similar threats, also suffered a fierce fire season.

“The businesses, national or international, which harm the Amazon and fail to respect the right of the original peoples to the land and its boundaries, and to self-determination and prior consent, should be called for what they are: injustice and crime,” the pope wrote.

When businesses seek profit above all, corrupt authorities give companies easy access to timber and minerals, and companies “raze the forests and pollute the environment, economic relationships are unduly altered and become an instrument of death,” he added. 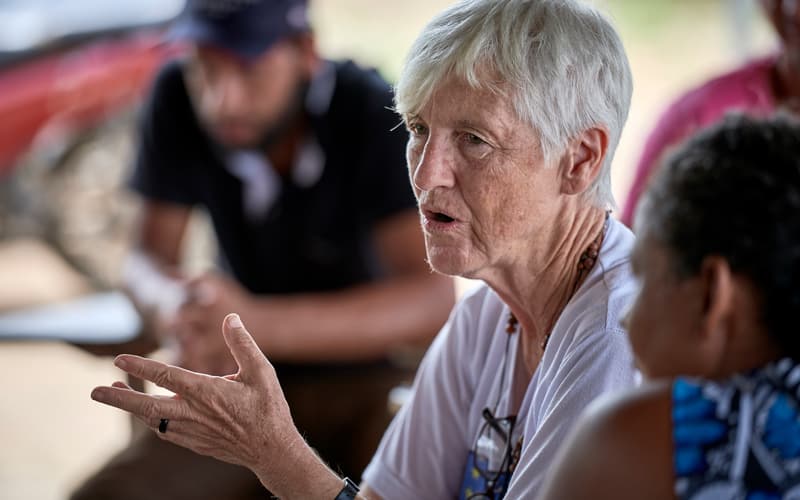 U.S. Sister Kathryn “Katy” Webster, a member of the Sisters of Notre Dame de Namur from the United States, talks with farmers in the countryside near Anapu, in Brazil’s northern Para state. (CNS photo/Paul Jeffrey)

For those who defend their lands against loggers, miners and ranchers, the stakes are high. At least 164 people were killed worldwide in such efforts in 2018, according to the nonprofit organization Global Witness, which says the figure is probably low. In many cases, the killers are never brought to justice.

The deadliest countries include Brazil, Colombia, Guatemala and Mexico. The pope’s exhortation was issued Feb. 12, the anniversary of the 2005 murder of Notre Dame Sister Dorothy Stang, who worked with small-scale farmers in Brazil.

Although Pope Francis warns that extractive industries are a new form of colonialism in a region where the church must work to dismantle the vestiges of a colonial past, the exhortation is not a political statement, Archbishop Roque Paloschi of Porto Velho, Brazil, told CNS.

The pope’s words “make us aware that we must respond to the cry of God in the cry of the poor and the cry of creation,” Archbishop Paloschi said. “More than a political impact, it needs to have an impact on the church and require us to take a united stand.”

Nevertheless, the church “must become more and more prophetic” in speaking out against policies that threaten indigenous peoples and the environment, Brazilian Sister Rose Bertoldo, a Missionary Sister of the Immaculate Heart of Mary who was an observer at the synod, told CNS. 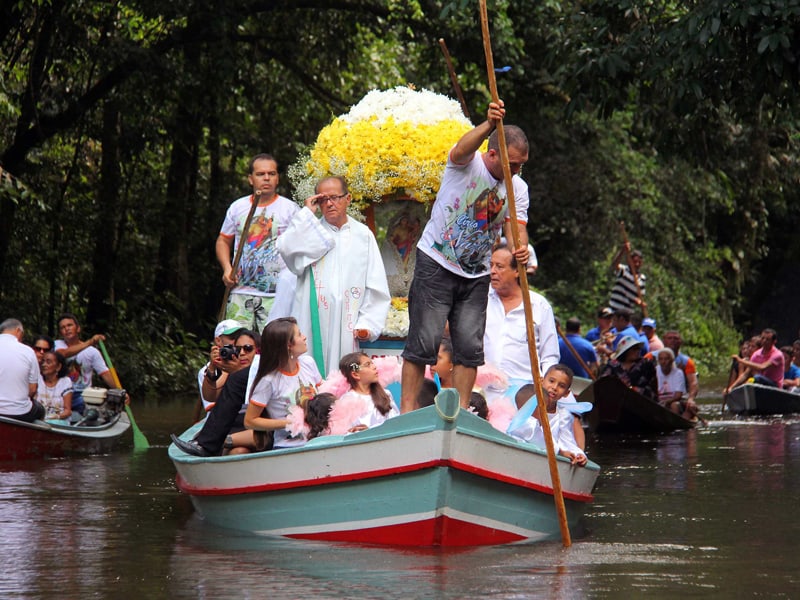 Pilgrims travel in boats as they accompany the statue of Our Lady of Nazareth during an annual river procession and pilgrimage along the Apeu River to a chapel in Macapazinho, Brazil, Aug. 3, 2014. (CNS photo/Ney Marcondes, Reuters)

For Sister Bertoldo, one notable omission in the exhortation was the concept of “ecological sin.” Synod participants had recommended that actions like pollution, environmental destruction and environmental injustice that endanger future generations be recognized as “ecological sins of commission or omission against God, against one’s neighbor, the community and the environment.”

Archbishop Paloschi said that in leaving that out of the exhortation, the pope chose to encourage the church toward a necessary conversion rather than taking a punitive approach.

A linguist, he works with indigenous groups in Brazil, including the Macuxi and Kokama, to help them recover their languages, which are in danger of being lost if parents and grandparents no longer teach their children. 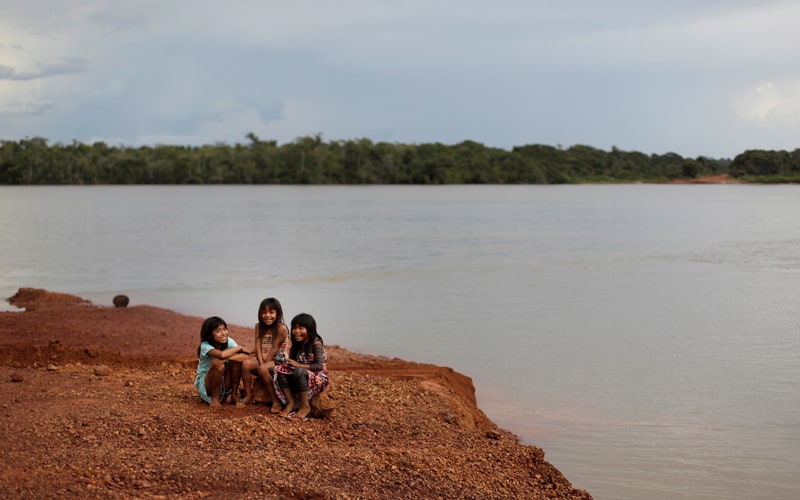 The mission is important for the church, he said, because some early missionaries punished children for speaking their native languages in school, although other missioners learned languages, compiled dictionaries and translated Scripture into native languages.

Language, he said, enables missionaries “to experience the world from another point of view.” It also underscores the great cultural diversity that exists in the Amazon basin along with the region’s biological diversity.

The message of Beloved Amazonia should echo far beyond the region’s boundaries, Josianne Gauthier, executive secretary of CIDSE, an international consortium of Catholic development agencies and an invited guest at the synod, told CNS. 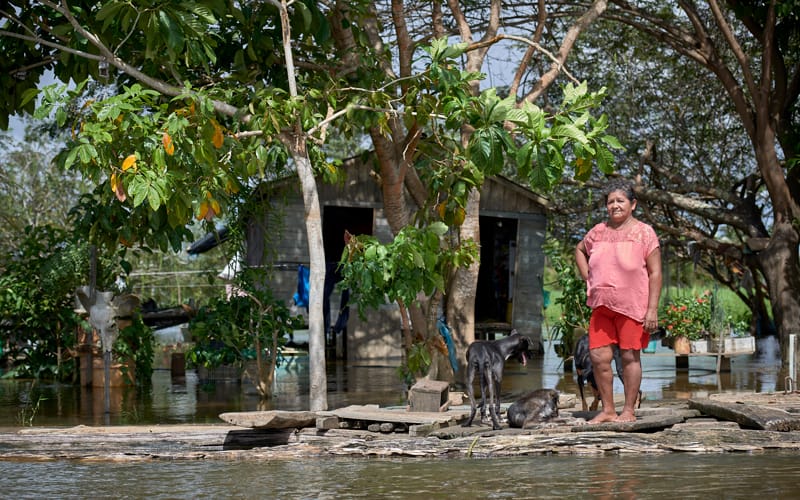 “There’s something we need to learn from that — how do we listen?” she said, adding that people can practice that in their own parishes.

Catholics can also respond to the exhortation’s invitation to seek ways of “just standing back and learning to love creation and nature in the way traditional peoples do,” she added.

And they can respond to the synod’s call to envision new ways of being church.

“Can we bring something from the synodal process into our parishes?” she said. “Can we learn to listen again, to each other and to ourselves?”

To read the CNS coverage of the Amazon Synod, click here. 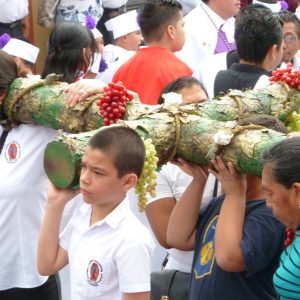 WEB-ONLY FEATURE: Walking the Stations of the Cross in Santa Leonor and La Esperanza || In front of her home, Iris,...

Mar 1, 2020
Copyright 2020 Maryknoll Fathers and Brothers. All Right Reserved.
Back to top