Father Murray, a veteran missioner, reflects on a life of service

Maryknoll Father Eugene Murray sums up the essence of his 62 years of missionary priesthood in two simple phrases: being kind to people and relying on God’s grace.

“I enjoy my mission life. I love the sacramental part of saying Mass, giving Communion, helping the people in their relationship with Jesus,” he says. “As you do the missionary work, you try to keep close to our Lord and you ask for His help and His graces.”

His parishioners at Our Lady of China Church are eager to list the ways the priest’s kindness has impacted their community. “He is selfless and has a big, warm smile,” says Wei Ren Jr, who was baptized at the parish and learned about the Bible from Father Murray. “He shares God’s love in his daily life.”

Wang De Lan, a new parishioner, says she is impressed by the priest’s patience. “He never talks about others’ faults,” she says. “I really like his way of guiding us. He is a good shepherd.”

In Taiwan, 88-year-old Father Murray is known as Father Dzeng Syan Dau, meaning “one who makes manifest the teaching.” Parishioners explain how he teaches by example.

“He’s found a lot of the lost sheep,” Wei says through an interpreter. “He cares about the community, going to the hospitals and the jail.”

Father Murray has worked in several parishes, been director of the Maryknoll Language Center in Taichung and taught English at a high school and a Catholic university. He also worked as a prison chaplain for over 20 years, visiting inmates weekly. “One of them had his whole family baptized and he joined the Legion of Mary,” Father Murray says.

Eugene Murray, who grew up with eight siblings in the Bronx, N.Y., was inspired to be a priest while attending Cardinal Hayes High School and hearing Maryknoll Father Joseph English speak about the missions. “He talked to us about how many people have not yet heard the name of Jesus, especially in places like China,” Father Murray recalls. “I was very moved by that.”

Then 15-year-old Murray joined the Venard, Maryknoll’s junior seminary in Clarks Summit, Pa. Eleven years later, he was ordained a priest. He was assigned to Taiwan in 1958. “It became my whole life,” he says. 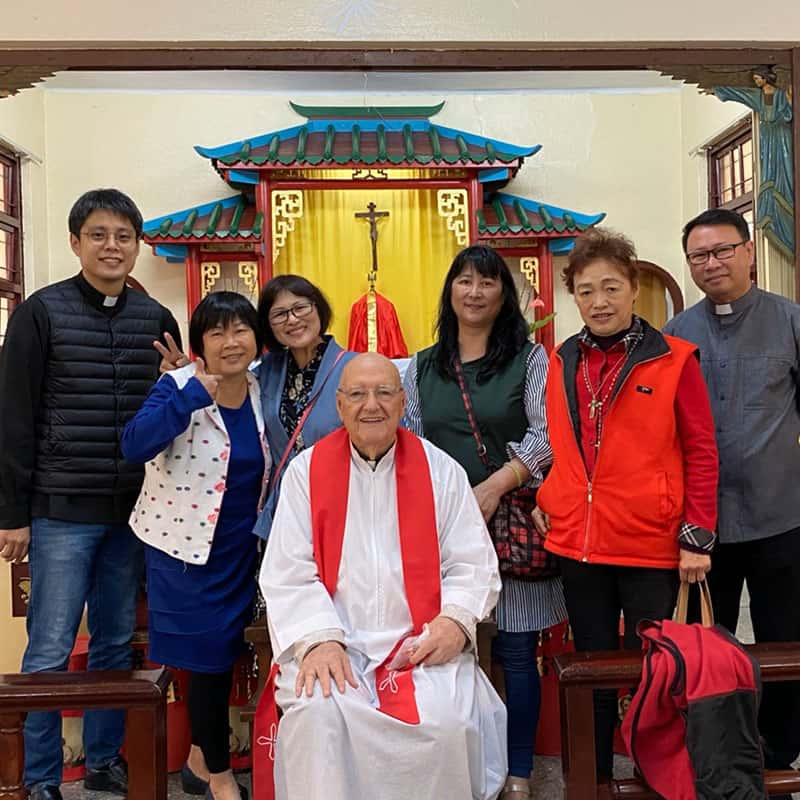 Recalling the Taiwan he first encountered, Father Murray says: “It was an agricultural society,” where people worked in rice fields but had time between planting and harvesting to listen to priests and catechists. “Maybe 40 to 50 people would study the doctrine and get baptized together, and they would form a community.”

Industrialization transformed Taiwan in the 1960s, he says, prompting young people to move to the cities to work in factories. Even though the Taichung Diocese and Maryknoll reached out to Catholics in the cities, he says, the demands of modern life made it harder for new people to get involved with the Church. “People are busy all the time, all year round,” the missioner says.

Nowadays, he adds, people’s needs are not financial but spiritual. In Taiwan, about 1.5 percent of the population is Catholic. “People are looking for things that give more meaning to their lives,” he says. “It is not just making money and producing a lot of goods that makes you happy. It’s peace of mind coming from God.”

During the three years he spent away from Taiwan, Father Murray’s work included helping the United States Catholic Conference to resettle Vietnamese refugees after the Vietnam War. He returned to Taiwan in 1976 and was assigned to Shalu parish, which did not have many practicing Catholics. Father Murray and the parish catechist visited the Catholics who were registered to invite them back to the Church.

He remembers Tio Bi Le, a young factory worker and his first catechumen in Shalu. Before Tio Bi Le was baptized, her mother told her, “Oh, you are going to be a hungry ghost,” referring to the custom to put out food for the dead during big feast days. Father Murray adds, “She told her mother: ‘No, I won’t be a hungry ghost; I remember listening to the doctrine very carefully, and for Catholics, there is an everlasting banquet in heaven.’ ” She went on to become a catechist, married and raised Catholic children.

“The people who believe and are baptized are rather faithful,” Father Murray says. “It’s gratifying to see how much the faith means to them.” 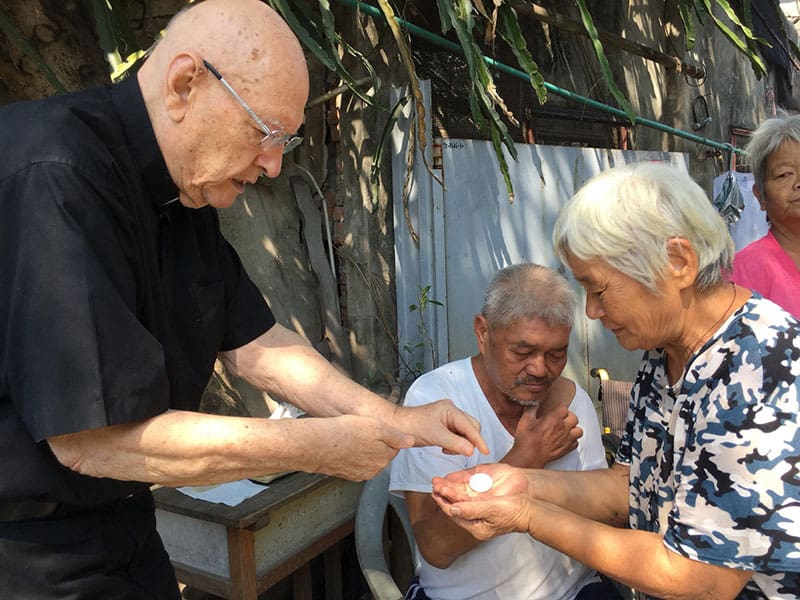 Father Murray visits elderly or sick parishioners at least three times a week, bringing the sacraments to them. (Courtesy of Our Lady of China / Taiwan Church)

Since 1985, Father Murray has served in Our Lady of China parish in Ching Shui, Taichung. “The majority of my Catholics are mainland Chinese who came over in 1949, with Chiang Kai-shek,” he says.

The nationalist Chinese army of Chiang Kai-shek retreated to Taiwan after being defeated by the Communists under Mao Zedong. Soldiers and their families were living in military villages that the Taiwanese government built for them. Ten years ago, the government reclaimed the land, built 10-story buildings and moved the people into these apartments. The soldiers and their families—who arrived in their 20s—are now elderly and often have foreign workers taking care of them. “I visit them often with the Legion of Mary members,” he says. “We bring them Communion and we anoint them, if necessary.”

“He is just like a father figure,” says Li A Hau, a parishioner who accompanies Father Murray on his visits. “When a parishioner needs anything, he tries to fulfill all the needs of the parishioner. But Father never asks parishioners to do something for him.”

Father Murray officially became a Taiwanese citizen in 2017, after the government allowed foreigners to have dual citizenship. “I applied at the encouragement of some of my Catholics,” he says. Many parishioners laud his fluency in the Mandarin and Taiwanese languages. “He is completely immersed in our Taiwanese culture, tradition, family and societal values,” Wei says. “Except for his appearance, he is totally Taiwanese.”

Father Murray feels grateful to have been able to share God’s message in Taiwan. “The credit is to God and God’s grace,” he says. “Everything falls into place.”

Sister Reiley gives witness to a man on a cross 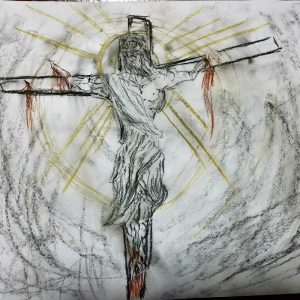 Sister Reiley gives witness to a man on a cross

Maryknoll Sister Kathleen Reiley shares love and compassion at a children's ward in a cancer hospital in Tokyo, Japan || Every...