Brenda Noriega considers herself doubly blessed. She got to meet with Pope Francis—twice! The first time was at a private lunch at World Youth Day in Panama. The second was at an audience with the Holy Father at the Vatican after the Synod of Bishops on youth.

She has taken to heart the pope’s message to youth: Although you are always in a hurry, never be too busy to help and go out to encounter your brothers and sisters.

As a lay leader in California, Noriega has been putting that message into action in her own life and in her mentorship of other young people. Now, as a Maryknoll mission promoter in Los Angeles, she hopes to do even more to encourage young people to recognize the importance of mission overseas and service at the local level.

Noriega, 30, says she is well acquainted with the struggles of youth, having gone through adversity in her teen years and times of great spiritual darkness.

She recalls meeting her first boyfriend when she was 15 years old in her native Guanajuato, Mexico. “It started as a normal relationship and then he began to control my decisions: the way I dressed, how I combed my hair, the friends I had and the activities I attended,” she says. As the relationship continued, she suffered physical, emotional and sexual abuse from her boyfriend.

Noriega, who had been baptized a Catholic but attended an evangelical church as a child, eventually turned to occultism. “My friends came from dysfunctional families and we didn’t know what we were doing,” she says. “I was depressed and so confused with my life that I tried to commit suicide twice.”

Yet she hid her suffering from her parents, fearing they would be disappointed in her. “I was raised with love, but at that age I had no conscience,” she says. 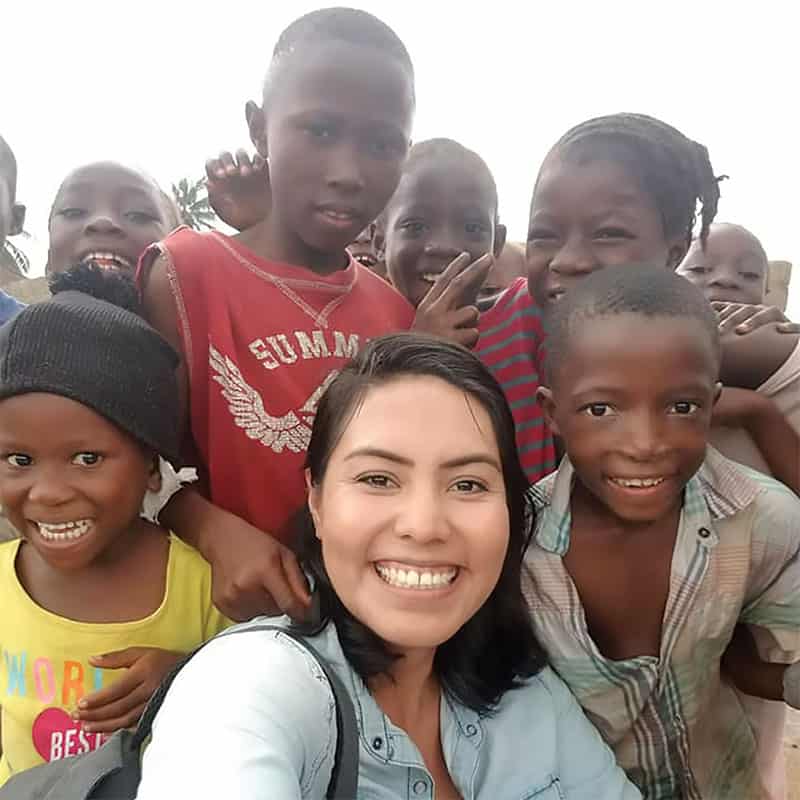 When her parents noticed the changes in her personality and realized the abuse she endured, they advised their daughter to end the relationship with her boyfriend, but she refused. They decided to send her to Fresno, Calif., to live with her brother. “It was the only way my parents found to save me from myself,” Noriega says.

However, at 17, she resented her parents’ decision, and found it difficult to study in high school.

Then a schoolmate invited her to a weekend spiritual retreat that changed everything. She recalls kneeling before the Blessed Sacrament and hearing a voice say: “Don’t be afraid; I’m here. Don’t be afraid; you’re already here.”

“I felt abundant love and peace in my heart,”’ says Noriega. “That was my conversion. From that moment, I decided to give myself to God. I clung to Him like a castaway clings to a raft in the middle of the ocean.” She returned to her Catholic faith.

As a student at California State University, Fresno, she says, “I felt a strong call from God, but I didn’t understand what he was asking me to do.” During vacation, she went to Colombia to discern a vocation to religious life with an order of sisters founded in Colombia to do evangelization work. 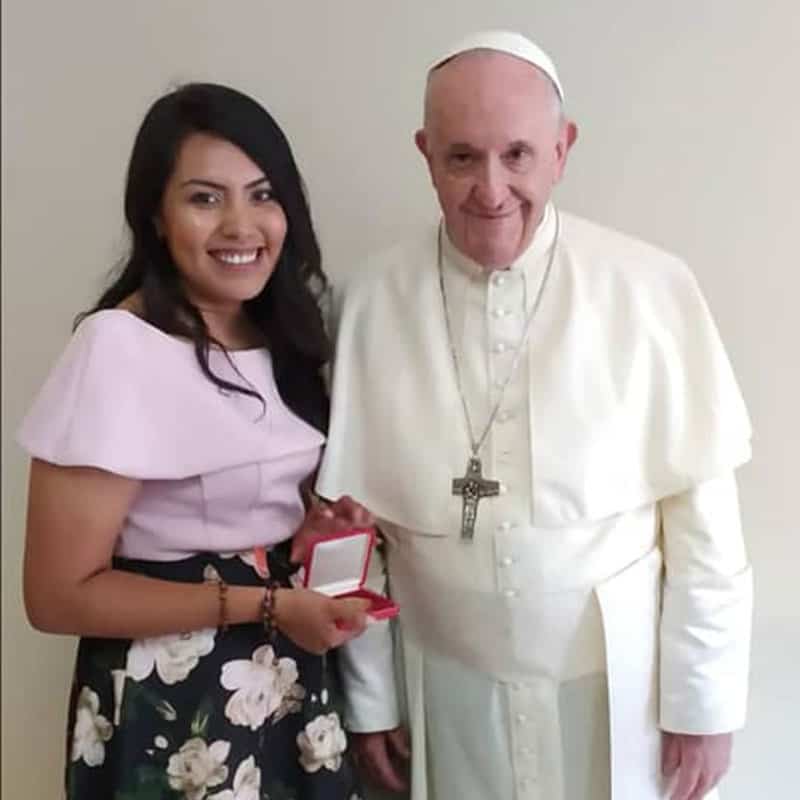 Brenda Noriega poses with Pope Francis for a photo at World Youth Day in Panama, 2019. (Photo provided by Brenda Noriega/Panama)

The following year, she returned to that country on a three-month mission trip to evangelize, pray for the poor and vulnerable, and organize retreats in the town of Cauca.

There, she was moved by the faith of a man named Felipe, who was terminally ill with cancer. She traveled for two hours to his poor village to pray with him. “He said that his body healed and the pain went away when we prayed,” Noriega recalls. “I knew that man’s faith was greater than mine.”

Returning to California, Noriega saw that there were people just like Felipe in Fresno who also suffered and needed prayer. It was then that she realized her vocation was to serve her local community as a layperson.

Before graduating from college in 2012 with a degree in Latin American literature and non-profit organizational management, Noriega did an internship at the Diocese of Fresno and at a grassroots organization where she learned faith-based community organizing. It was an enriching experience, she says, and she immersed herself in reading the documents from the Latin American bishops’ meetings in Puebla, Medellín and Aparecida that implemented the teachings of Vatican II. She learned the “See, Judge and Act” methodology, which she would apply in her ministry with young people. 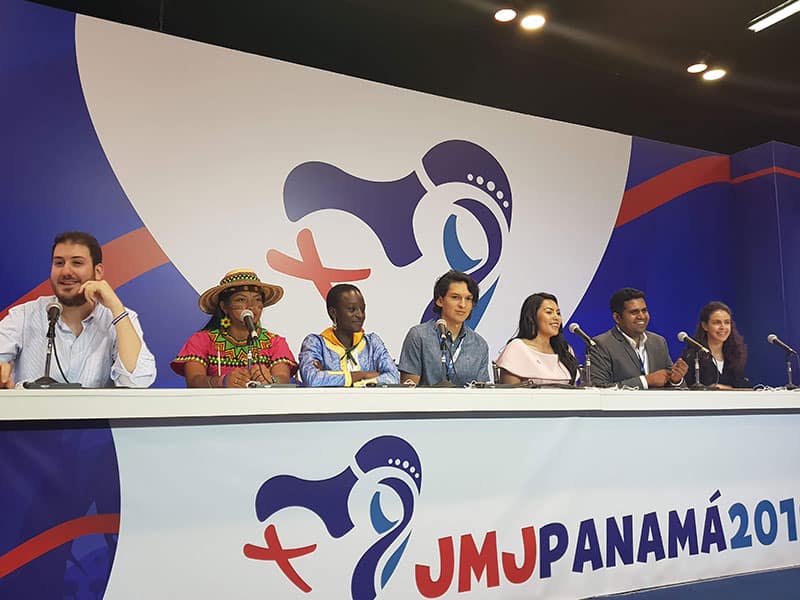 In a press conference, Noriega (third from right) with other young people who participated in a private lunch with the Holy Father at World Youth Day in Panama. (CNS/Panama)

Noriega continued her studies, earning a master’s degree in pastoral theology, and in 2014 began a three-year commitment as coordinator of Hispanic ministry for the Diocese of Fresno, followed by two years as coordinator of youth programs in the Diocese of San Bernardino. Those jobs opened doors for her to collaborate on multiple committees representing youth.

“To serve Christ today, it is necessary to have spiritual guides, mentors, teachers, family and friends,” she says of youth. “The clearest way to feel Christ is, sometimes, through those who have coffee with us.”

She participated in the V Encuentro at the parish, diocesan, regional and national level. “One of the fruits of the V Encuentro was the invitation to Hispanics to take a leadership role, not only among Hispanics but throughout the Church,” she says. 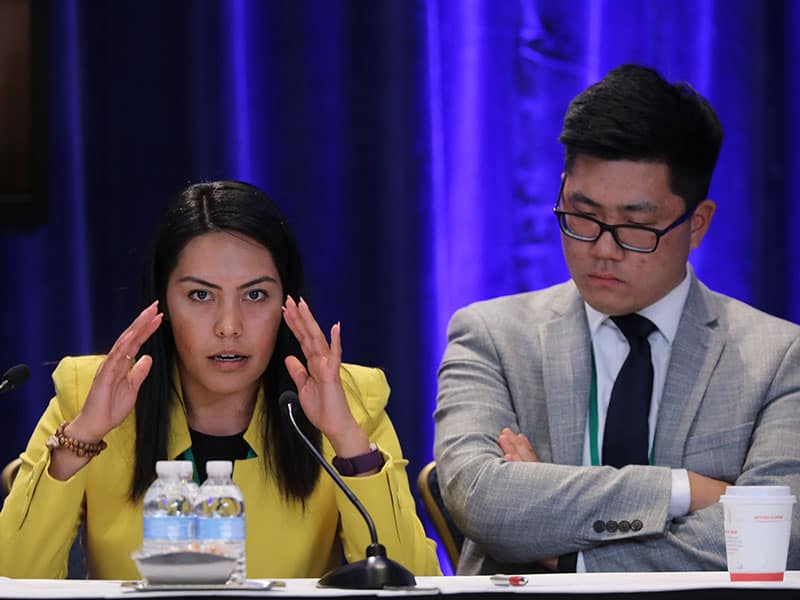 Brenda Noriega with Brian Rhude during a press conference at the United States Catholic Assembly in Baltimore. (CNS/Baltimore)

Representing the United States, she joined nine young people from other countries for lunch with the pope at World Youth Day in Panama in January 2019.

Then, last June, she attended an audience for Pope Francis’ post-synod exhortation with 250 young people from different parts of the world and greeted the pope again. “The pope stressed that young people are God’s now, not just the future,” she says.

Last November, Noriega was invited by the Vatican Dicastery for Laity, Family and Life to join the advisory committee for young Catholic leaders for a three-year term. “The pope wants to continue the dialogue with youth,” says Noriega, who is one of 20 participants. “It is a great responsibility to know that I am representing the United States and young people. I have to listen to them and get their message across, be accessible for them to open up to me., not just Hispanics, but African Americans, Native Americans and Americans.” 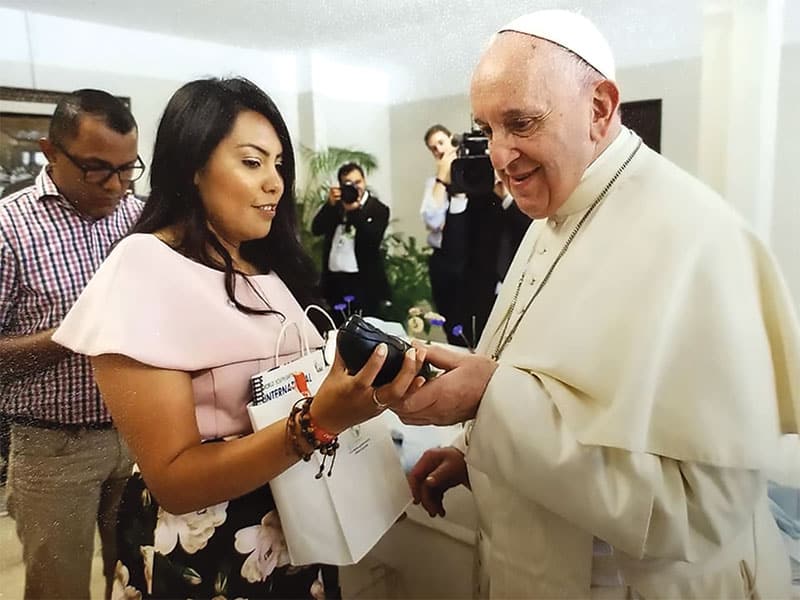 After sharing a lunch with Pope Francis, Noriega gives him an image of Our Lady of the Angels on World Youth Day in Panama. (Photo provided by Brenda Noriega/Panama)

She is filled with hope. “When I see young people who have a great desire to find God and are willing to change their lives, I see in them the face of Christ,” Noriega says. “They keep reminding me why I get up every day saying to God, ‘Yes, Lord, I am going to be a minister in your Church.’”

Featured Image: In her work at the Diocese of Fresno, Brenda Noriega participated in a Mass on September 11, 2015, at the Cathedral of the Holy Name in Chicago. (CNS/Chicago)) 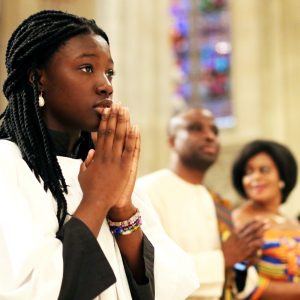 The Roman Catholic Church continues to struggle with the role of women || Just before starting Mass for the solemnity...