Recently ordained a priest, I have been assigned to a Maryknoll parish in Dar es Salaam, Tanzania. As one of my ministries, I started visiting the sick and homebound. I was deeply moved by one young man in particular, Daniel, who is 23 years old and is paralyzed from the neck down after sustaining serious injuries in a collision between a boda boda (a motorcycle taxi), in which he was the passenger, and a car. Due to poor healthcare and lack of resources in Tanzania, Daniel is limited to lying on a mat on the floor, and is turned over every four hours to try to avoid bedsores.

Despite his suffering, his heart is full of love and joy. He praises God that he is able to speak and that his mind still functions clearly. Where other people might be cursing their fate, his faith has grown stronger and he is grateful for the graces he has received. I have devoted myself to regular visitations of this living saint, who is a shining example for all people of the importance and unlimited potential for gratitude.
Jonathan Hill, M.M.

Teaching in the altiplano of Peru (at 13,000 feet above sea level) many years ago, I found myself in a unique situation. The school, which was just for girls, was a one-room building made of adobe with a corrugated tin roof. There were about six rows of worn wooden desks with attached benches. They were lined up three in a row from wall to wall, with no aisles between, with spaces for three students to sit at each desk.

There were no windows. The only source of light was through a small open door on the right-hand side of the front of the room. As students arrived, they hopped up on the desks, ran across them and dropped into an empty slot, and there they were, seated for the lesson! Since they were Aymara Indian girls, all had dark hair and most were wearing dark shawls on their heads. With no light, it was quite a chore to make out the faces of the girls in the darkness. But there they were!
Helen Phillips, M.M.

When I was studying in the Maryknoll Seminary in Maryknoll, N.Y., in 1964, my pastoral ministry was to teach the Rite of Christian Initiation of Adults (RCIA) at the famous Sing Sing Prison in Ossining, N.Y. This included serving on the altar for the Sunday High Masses. Once when I was carrying and swinging the thurible in which the incense is burned, I tripped and spilled some incense on the steps. Later I apologized for my mistake to the inmate who was the sacristan. He answered, “Oh, I thought that was part of the ceremony.”
Joseph Healey, M.M.

When my husband Erik and I were serving in El Salvador as Maryknoll lay missioners, I worked with a women’s group called Pearls of Hope. The women made beaded doilies and jewelry to sell and earn a little income to help support their families.
One day I got into a truck with four of the women—Mati, Blanca, Raquel and Delma—and we headed to souvenir shops in San Salvador to sell their wares. No one was interested in buying the doilies, but the women sold some jewelry, so the trip was not in vain.
Along the way, we stopped to eat. For the first time these women feasted on pizza and sundaes. Although there were several flavors, they all chose strawberry. Their faces twisted in trepidation as they mounted the escalator and held on for dear life. The glass-enclosed elevator was another surreal experience. The women enjoyed being chauffeured throughout the city, ate well and expanded their horizons.
Margo Cambier

From the editor: An Ill Wind 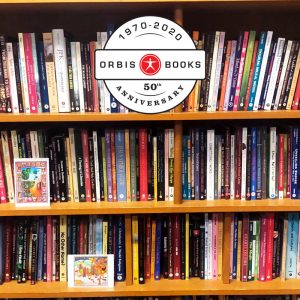 Maryknoll’s Orbis Books marks a half century of publishing a world of books that matter || Fifty years ago this month,...