Call to Accompany Others Extends to Immigration, Says Attorney

WASHINGTON (CNS) — Immigration “is not political—or it should not be political. This has nothing to do with party affiliation,” according to a Catholic immigration attorney who works in El Paso, Texas.

“This country has the resources to welcome many people,” said Heidi Cerneka, who works for Las Americas Immigrant Advocacy Center and also is a Maryknoll lay missioner, in a May 15 presentation at the National Conference on Catechetical Leadership’s online “Witness” conference that runs through May 21.

“But if that concerns you, let’s look at asylum,” Cerneka said in her presentation, “Immigration and Our Call to Accompany,” calling asylum “the legal and moral commitment we as a country have made.”

She cited a 1954 United Nations convention on asylum that came about when U.N. member nations realized asylum needed to be extended to more than just those fleeing Nazi Germany.

When a U.N. member nation ratifies a convention, it then carries the force of law in that country, Cerneka said. “In 1967, the U.N. wrote an addendum, called a protocol, to the refugee convention that said what is a refugee,” she added.

A refugee is someone who has been forced to flee his or her country of origin because of persecution, war or violence, and must demonstrate a well-founded fear of persecution because of race, ethnicity, religion, nationality, political opinion or membership in what Cerneka called a “particular social group,” as different groups may be on the outs depending on who is in power. The refugee, she added, either cannot return or is afraid to return, and the state is either the perpetrator or is unable or unwilling to control the perpetrator.

“Then the U.S. wrote the INA, the Immigration and Naturalization Act,” Cerneka said, noting, “You can’t write your own law that is different than what you signed at the U.N.”

In her experience in El Paso—Cerneka previously dealt with immigration and asylum issues in Kenya and Brazil—only a minority of those seeking asylum do so just to have a better economic opportunity.

Due to federal policies put in place over the past three years, Cerneka said, only about 5% of those who make asylum claims are successful in staying in the United States. 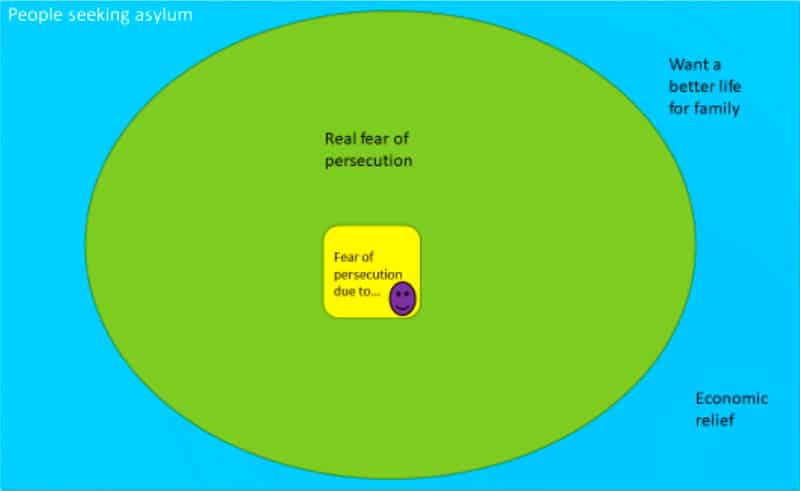 This illustration represents asylum-seekers fleeing to the U.S. from other countries. The purple circle designates the 5% who successfully get in these days, according to immigration advocates. (CNS photo/courtesy Heidi Cerneka)

She spoke of one refugee, Jennifer, and her mother, both of whom she interviewed. They had to leave their native Honduras so quickly, she said, Jennifer was still wearing her school uniform.

“Jennifer and her mother walked three months to get to the border and ask for asylum,” Cerneka said. When she wouldn’t join a gang, gang members accused her of being gay for not joining and said, “Let’s get that lesbian.” But that’s not why she left, Cerneka added. “She left because she had no other choice. So, until we meet Jennifer … it’s hard for us to understand the reality of why they’re fleeing.”

She quoted the Hope Border Institute, also based in El Paso: “Are we, as a church and as a nation, a beacon of hope for the world’s downtrodden and dispossessed, or are we just another level of hell?”

“At this moment,” Cerneka said, “we are just another level of hell they have to survive, to make them wait in Mexico, waiting in detention … despite the increased risk of infection from COVID-19.”

She noted that in the State Department’s annual country reports on human rights, the secretary of state writes an introduction. In the most recent reports issued, Cerneka said, Secretary of State Mike Pompeo said, “The United States is founded on the premise that all persons are created equal, and they are endowed by their creator with unalienable rights. Among these are the life, liberty and the pursuit of happiness.”

“I believe we can be that country,” Cerneka said. “I don’t think we are that country right now. But I think we can be the country that protects all persons, not just all citizens. I believe the Gospel, our faith, calls us to do that.” 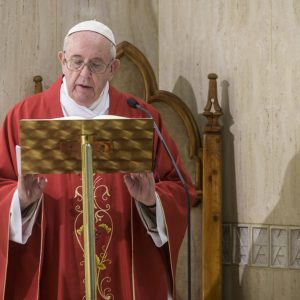 May 14 marked day of prayer, fasting and acts of charity to ask God to stop the coronavirus pandemic || VATICAN CITY...

May 14, 2020
Copyright 2020 Maryknoll Fathers and Brothers. All Right Reserved.
Back to top