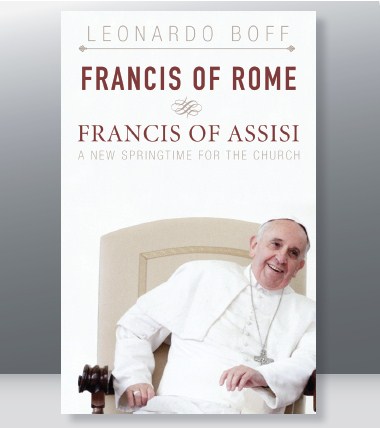 The election of Pope Francis marked several firsts: first Jesuit pope, first pope from Latin America, first pope to take the name Francis. Many wondered whether his choice of a name implied a preview of his vision for the Church. A church inspired by St. Francis would embrace those on the margins, eschew power, promote peace, dialogue with other faiths, and care for creation. In fulfilling the promise implied in his name, Pope Francis has unleashed enormous hopes.

The connection between the pope and the saint is the subject of a new book by Leonardo Boff, Francis of Rome & Francis of Assisi. Boff, a former Franciscan and one of the leading theologians of Brazil, is the author of over a dozen Orbis titles, including Francis of Assisi. His new book originated as a series of essays timed for the pope’s trip to Brazil for World Youth Day. But in light of the continuous stream of extraordinary statements by the pope, including his historic interview in America magazine and his apostolic exhortation, The Joy of the Gospel, this book grew and took shape.

It begins with an assessment of the Church in recent years, the sense of demoralization in the face of scandals, the widespread perception that the Church had become too self-centered. Cardinal Bergoglio at the papal conclave gave voice to this concern when he called the Church to “come out of herself” and go to the margins.

Boff traces the parallels between St. Francis and Pope Francis. The mission of St. Francis took form in response to a voice from a crucifix that said, “Francis, repair my church.” He set out to restore the Church to the example of Jesus. He envisioned, like Pope Francis, “a poor church for the poor” an ecological church in which all creatures were “brothers and sisters.” In a kindred spirit, Pope Francis has rejected the trappings of power; he has called for pastors who “smell of the sheep”; he has wept over the sufferings of the poor, and emphasized mercy as the key expression of the Gospel.

By analyzing the pope’s writings, Boff explores the potential in Pope Francis for a systematic reform and renewal of the Church. He writes, “Francis represents a new dawn of hope, a sign that a new spring can burst upon the Church, with all its vitality and splendor. In this way it can regain credibility and truly become a sacrament of liberation for so many who are crushed by countless oppressions. It was for them, first of all, that Jesus came into the world, gave his life, and wants his representative to strengthen them in faith and hope. Francis is making the Church become a spiritual hearth again, where it is good to live together, struggle and celebrate life with others in dialogue, in closeness, tenderness and love.”

A Library of HOPE

CULTIVATING the future in the HIMALAYAS

A Library of HOPE

Story and photos by Rick Dixon, MKLM Books open the world to children in a poverty-stricken neighborhood in El Salvador Nine-year-old...

Sep 5, 2014
Copyright 2019 Maryknoll Fathers and Brothers. All Right Reserved.
Back to top