The Way of Gratitude Anthology

Readings for a Joyful Life 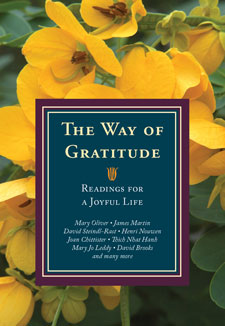 “Gratitude is not only the posture of praise,” writes Sister Joan Chittister in Orbis Books’ new anthology The Way of Gratitude: Readings for a Joyful Life. “It is also the basic element of real belief in God.”

This startling insight is one of many to be found in The Way of Gratitude, Orbis’ third compilation of this type (after the best-selling Advent and Lent devotional readers Goodness & Light and All Shall Be Well). Compiled by editors Doris Goodnough, Michael Leach and James T. Keane, the book includes brief selections from 44 different authors and offers a mix of essays, articles and poetry. In addition, short aphorisms and quotes about the practice of gratitude are scattered throughout the book as “thank-yous.”

The editors cast a wide net in making their selections, with the result that the book’s contributors are a mix of religious and secular writers. Readers might be surprised at some of the names included. One of the most moving essays in the volume, “The Structure of Gratitude,” was penned by New York Times columnist David Brooks.

Writing about the ways in which the expression of gratitude can be a countercultural practice in the contemporary economy, Brooks notes that gratitude works by its own baffling logic. “The basic logic of the capitalist meritocracy is that you get what you pay for, that you earn what you deserve,” Brooks writes. “But people with dispositional gratitude are continually struck by the fact that they are given far more than they pay for—and are much richer than they deserve.”

Another entry that might be surprising to some is a selection from J.K. Rowling, author of the Harry Potter novels. Rowling received a letter in 2006 from a 16-year-old girl who had seen both her parents murdered and was caring for her younger siblings, and who wrote to thank Rowling for creating Harry Potter, whom she considered her “best friend.” Both that letter and Rowling’s gracious response are included in the volume.

The editors were also able to mine Maryknoll’s rich resources for material, including two reflections written by Mother Mary Joseph Rogers, founder and longtime superior of the Maryknoll sisters. “Are we grateful to God for His particular gifts, for His general gifts?” Mother Rogers writes. “Are we grateful to our parents, brothers and sisters and benefactors? Are we grateful to our friends? It should not satisfy us simply to say, ‘I am grateful; I owe thanks.’ The great point is this: Is our gratefulness, our gratitude, an active thing?”

Perhaps the most moving selection in the book comes from Wendell Berry, who uses his own farm as the setting for a bittersweet but beautiful reflection on learning to be humble:

I go by a field where once
I cultivated a few poor crops.
It is now covered with young trees,
for the forest that belongs here
has come back and reclaimed its own.
And I think of all the effort
I have wasted and all the time,
and of how much joy I took
in that failed work and how much
it taught me. For in so failing
I learned something of my place,
something of myself, and now
I welcome back the trees.

More Than a Job at Maryknoll's Buffalo Office 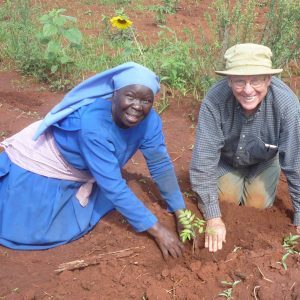 Sep 1, 2017
Copyright 2019 Maryknoll Fathers and Brothers. All Right Reserved.
Back to top