“I could sense fear in my fiancée’s voice. Fear as I had never felt it before. ‘They are here; they are surrounding the house,’ she was whispering, her voice trembling. I knew who ‘they’ were: The killers . . . I was about to say something when I heard a shot, followed by a scream; then the phone went dead. I screamed with rage, not knowing what to do. Slowly, I got down on my knees and began to pray.”

These are the opening words of a remarkable memoir by Jean Bosco Rutagengwa, a survivor, along with his fiancée Christine, of the Rwandan genocide that occurred 25 years ago this April. In the space of 100 days, as many as a million people—mostly Tutsis and moderate Hutus—were left dead, slaughtered by their own Hutu neighbors with machetes and other simple weapons.

Jean Bosco’s story begins with a charming description of his engagement ceremony with Christine, carried out according to elaborate rules of Rwandan tradition. But that story ends on a chilling note: “This would be the last time we were all together.”

Within weeks, in April 1994, the genocide was unleashed. Jean Bosco tells a hair-raising story of his personal survival—a matter of luck, wit and chance that spared him the fate of the victims all around him.

After escaping to refuge in what would later become famous as the “Hotel Rwanda,” he braved the incredible risk of leaving the hotel to rescue Christine, barely escaping certain death at militia roadblocks along the way.

Eventually the storm passed. They had survived. And then came the terrible realization—that virtually all their family members and friends had perished under terrible circumstances.

Love Prevails is a gripping and unbelievable story of survival—a vision of the hell that human beings can create for one another. But at the same time it shows the power of love.

It is a harrowing inside look at what happens when a country is overrun by evil. But it is also a story of faith—an effort to find God in the midst of horror—and of the subsequent struggle to find meaning, healing and reconciliation.

Jean Bosco and Christine are devout Catholics. Throughout this story we share their efforts to cling to their faith in the face of deepening tragedy and the feeling that “nothing makes sense anymore.”

We meet other survivors, including nuns and priests, whose faith was similarly challenged. But in the final section, titled “Resurrection,” we see the gradual effort to recover a sense of life and goodness—binding up the wounds of the survivors, bringing judgment to the architects of terror, and rebuilding a new society from the ashes of the old.

It is impossible to read this book without shedding tears. The stories of suffering and the confrontation with human cruelty are almost unbearable.

And yet one finishes with tears of gratitude—for a witness to the promise that life is ultimately stronger than the powers of death, and that Love, in all its forms, will ultimately prevail. 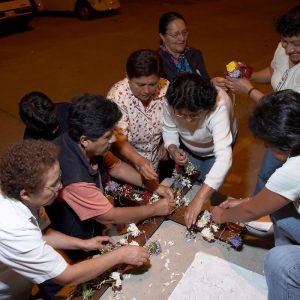 Readers respond to our print, web and social media posts || JOINT EMPATHY I join you in your empathy for refugees....