WASHINGTON (CNS) — The president of the U.S. Conference of Catholic Bishops and two other Catholic bishops criticized President Donald Trump’s April 22 executive order to temporarily restrict some forms of immigration during the pandemic, saying it could “fuel polarization and animosity.”

“While we welcome efforts to ensure that all Americans are recognized for the dignity of their work, the global crisis caused by COVID-19 demands unity and the creativity of love, not more division and the indifference of a throwaway mentality,” the prelates said late April 23.

They also said they are “extremely concerned” about how the proclamation will impact immigrant families “looking to reunify” as well as religious workers.

Issuing the joint statement were Archbishop Jose H. Gomez of Los Angeles, USCCB president; Washington Auxiliary Bishop Mario E. Dorsonville, chairman of the USCCB’s Committee on Migration; and Bishop Jaime Soto of Sacramento, California, chairman of the board of directors of the Catholic Legal Immigration Network Inc., or CLINIC.

The executive order will be in effect for at least 60 days and will be reviewed 50 days from the effective date of April 23 to determine if it needs to be continued or modified. Trump issued it as part of his administration’s response to the COVID-19 pandemic.

Trump said the restriction on immigration is necessary because of the pandemic’s pressures on health care and its widespread negative impact on the economy, and he cited “the impact of foreign workers on the United States labor market, particularly in an environment of high domestic unemployment and depressed demand for labor.”

“In order to protect our great American workers, I’ve just signed an executive order temporarily suspending immigration into the United States,” the president said during a White House coronavirus task force briefing. “This will ensure that unemployed Americans of all backgrounds will be first in line for jobs as our economy reopens.”

In their response, Archbishop Gomez and Bishops Dorsonville and Soto said: “There is little evidence that immigrants take away jobs from citizens. Immigrants and citizens together are partners in reviving the nation’s economy. We must always remember that we are all sons and daughters of God joined together as one human family.”

“We are extremely concerned about how the proclamation will impact immigrant families looking to reunify, as well as religious workers,” they continued, noting the executive order prevents certain immigrant family members from reuniting with their loved ones living in the United States.

“Additionally, it bars religious workers seeking to come to the United States as lawful permanent residents from supporting the work of our church, as well as many other religions, at this time,” they said. “This will undoubtedly hurt the Catholic Church and other denominations in the United States, diminishing their overall ability to minister to those in need.” 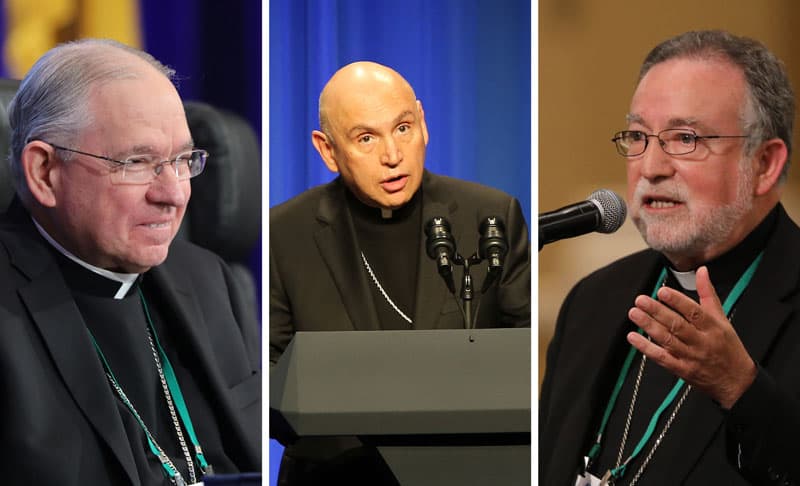 Archbishop Jose H. Gomez of Los Angeles, president of the U.S. Conference of Catholic Bishops, Washington Auxiliary Bishop Mario E. Dorsonville, chairman of the USCCB Committee on Migration, and Bishop Jaime Soto of Sacramento, Calif., chairman of the board of directors of the Catholic Legal Immigration Network Inc., are seen in this composite photo. (CNS composite; photos by Bob Roller)

The prelates said the virus “is merciless in its preying upon human life; it knows no borders or nationality,” and at a time when “our common humanity is apparent more now than ever,” they added, Trump’s action “threatens instead to fuel polarization and animosity.”

“Pope Francis teaches us that to live through these times we need to employ and embody the ‘creativity of love,'” they added.

There are several exceptions to the order, including: It does not apply to nonimmigrant temporary visas, current green card holders, those seeking to come in as “a health care professional, medical researcher, or other work related to combating, recovering from or alleviating the effects of the COVID-19 outbreak; a spouse or child of a U.S. citizen, and “any immigrant whose entry would seem to be ‘in the national interest.'”

It also does not limit “the ability of individuals to seek asylum, refugee status, withholding of removal or protection under various humanitarian agreements.”

A number of other faith-based immigrant advocacy groups also have weighed in against Trump’s executive order, including Catholic Charities USA and its president and CEO, Dominican Sister Donna Markham.

“While we understand the desire to protect people from further exposure to the COVID-19 virus, we should not sacrifice our humanity in our willingness to welcome others,” she said in an April 23 statement.

“We are a nation of immigrants. Many families in our communities await the arrival of their loved ones,” she said. “The executive order unnecessarily disrupts migrant communities at a time when many immigration processes are already suspended and many families are sheltering in place to slow the spread of COVID-19. The order will do little to combat a global pandemic that is present within our borders.”

Sister Markham added: “Working with immigrant communities is a core part of our ministry and we take great pride in the programs and services we provide them. Our faith calls us to seek justice for newcomers and we will continue to press Congress and the administration on their behalf to ensure they are treated with the dignity and respect they deserve.”

Said Susan Gunn, director of the Maryknoll Office for Global Concerns (MOGC): “The evils of racism and xenophobia do not stop during a pandemic. To suspend immigration is inhumane and will split up families seeking safety.”

“The facts are that immigrants are good for the economy, especially during this pandemic,” she said April 23. “Some 25% of doctors and 70% of farmworkers are immigrants, and we need more, not fewer, of these and other essential workers during the novel coronavirus pandemic.”

Gunn said this latest action by Trump is all part of his “zero-tolerance” immigration policies and “illustrate the next steps the United States has taken down an already dark path–a path clouded by fear and distorted ideologies that violate our core values and further diminish the United States’ role as a world leader.”

But Thomas Homan, the administration’s former acting director of U.S. Immigration and Customs Enforcement, told the Reuters news agency that “it’s really not about immigration.”

“It’s about the pandemic and keeping our country safer while protecting opportunities for unemployed Americans,” he said.

By April 23, more than 26 million Americans had filed for unemployment.

Featured image: A Honduran immigrant near El Paso, Texas, who is affected by the U.S. Migrant Protection Protocols, better know as the “Remain in Mexico” program, walks back to Ciudad Juarez, Mexico, April 20, 2020, after U.S. Customs and Border Protection changed his family’s dates for immigration court during the coronavirus pandemic. (CNS photo/Paul Ratje, Reuters) 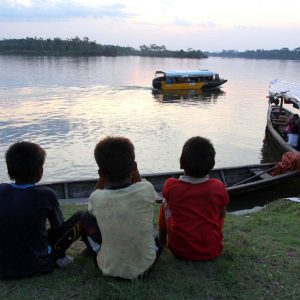 Apr 25, 2020
Copyright 2020 Maryknoll Fathers and Brothers. All Right Reserved.
Back to top