Changing Course in a Time of Crisis

COVID-19 pandemic changes life for all
in Japan, including a Maryknoll priest

When the first coronavirus case was reported in Japan last January—the second country to report a case after it appeared in Wuhan, China—the students at Tenshi College in the city of Sapporo, Hokkaido, had already finished their exams. There were only a few students around the campus where Maryknoll Father Kenneth Sleyman has been teaching for 19 years.

“Unfortunately, COVID-19 caused us to cancel all activities in February and March, such as graduation, retirement parties and the overseas study programs. All non-essential meetings were canceled and essential ones were held in large classrooms allowing two meters between participants. Masks were requested for staff and faculty, and hand sanitizer bottles were everywhere on the campus to disinfect ourselves,” says Father Sleyman, adding that online classes are now the only way students can study until the virus subsides.

“In churches the first edict was to replace holy water fonts with hand sanitizers,” he says. “Soon, Masses and gatherings of more than 10 people were forbidden. Most churches locked their doors.”

At Tenshi College, Father Sleyman teaches ethics in nursing, medicine, midwifery, nutrition, hospice care, a course on medical nomenclature and another on Christianity—in a college where the majority of students are non-Christians. As pastor at two churches, he responds to the pastoral needs of a tiny minority of Catholics who live in Sapporo.

On a typical day before the pandemic he would be seen going up and down the college floors, to his office to prepare his lessons and college activities, to the classrooms to teach, and to the chapel to pray with students and religious sisters who work at the Catholic college founded by Franciscans in 1947. Then he would drive his car to one parish to celebrate Mass and sometimes get on the road to travel to the other church to celebrate a wedding.

But even as COVID-19 has curtailed Father Sleyman’s activities, he continues tending his flock.

“My parishioners are taking the coronavirus panic in stride, assured by their faith that it will eventually be OK. I think that what Japanese Catholics miss most is the sense of community through which they receive strength and joy,” says Father Sleyman. “Masses have been televised on Youtube from Tokyo by Archbishop Kikuchi, and in lieu of attending Mass in person, most of my parishioners have been attending it online. I keep in-touch with them by sending out postcards each week to encourage them with a little homilet and a promise that I am praying for them in my private Masses.”

In many ways, Father Sleyman’s life has prepared him to respond compassionately to difficult situations. Born in Rochester, N.Y., he is the fourth of seven children of a devout Catholic family. When he was in high school, one of his sisters encouraged him to become a nurse. He studied at Shadyside School of Nursing in Pittsburgh. “Nurses and doctors being killed in the line of duty in the Vietnam War inspired me to also want to help where help was needed,” he says.

He went to work at Memorial Sloan Kettering Cancer Center in New York City. There he met Maryknoll missioners undergoing treatment. They reminded young Sleyman of his great uncle, Joseph Hunt, a Maryknoll priest who had served in China, North Korea and Japan. His example had planted the seeds of missionary priesthood in his nephew that would grow over time. 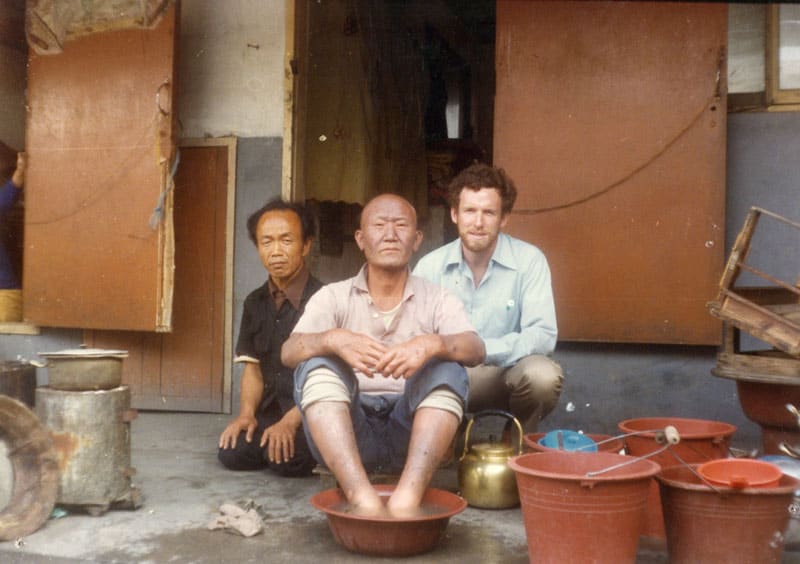 Treating patients who were unable to pay their medical bills sensitized Sleyman to the sad connection between care and poverty. Talking with patients and nurses from other countries stirred in him a desire to serve those in greatest need overseas.

Both his nursing and priesthood vocations continued to develop. “There was a Jewish girl who was dying,” remembers Father Sleyman. “I would read the psalms to her. It was the first time I realized that people’s spiritual needs are just as important at certain times.”

Between work and prayer, Maryknoll came back to Sleyman’s mind. He visited Maryknoll Society headquarters in Ossining, N.Y. While inquiring about a priesthood vocation, he met Maryknoll lay missioners. He decided to serve as a Maryknoll lay missioner in Bolivia, but a coup d’état there in 1970 changed his plans. He was assigned to South Korea, where he served for seven years.

He worked with Maryknoll lay missioners, priests and sisters. Serving at a leprosarium on an island where people with Hansen’s disease lived in confinement rekindled his vocation to be a Maryknoll priest. “Their ability to overcome pain with faith was an amazing model to me,” says Father Sleyman. “I said, ‘I want that type of faith.’ They were my models for going to the seminary.”

Sleyman joined the Maryknoll Society and received permission to study in Korea. “I was the only foreigner in a seminary with 500 seminarians,” says the missioner. 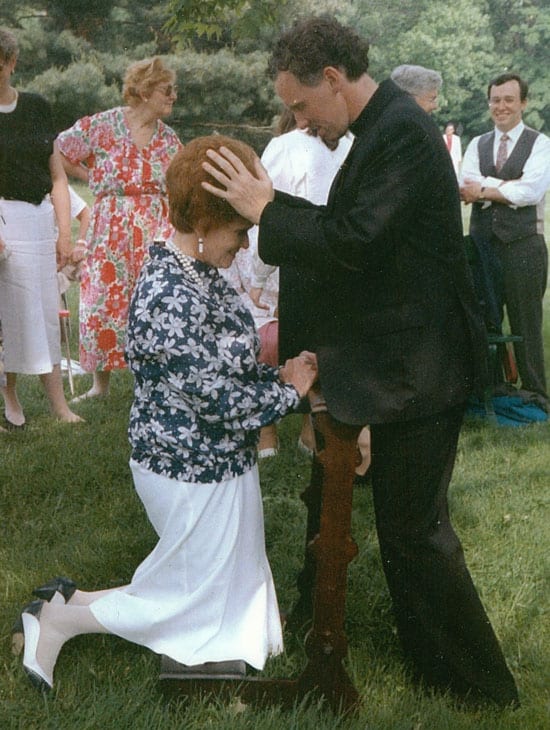 On the day of his ordination as a Maryknoll priest in 1990, Father Sleyman gives his mother his first priestly blessing. (Courtesy of Kenneth Sleyman/U.S.)

Now, with a master’s degree in bioethics from the Regina Apostolorum Pontifical University in Rome, he is adapting to a new way of life after COVID-19. and perhaps to a new way of teaching ethics in medicine.

“Medical ethics’ most basic definition is ‘to do good and to avoid bad practices,’ ” says Father Sleyman. “And the global assault upon COVID-19 has been toward the collective ‘good’ and to stop dangerous bad practices that could lead to greater infection of the masses.”

COVID-19, he says, has brought new awareness. “The deficit of technology in many places means people die sooner than they might have in other settings,” he says. “The heroism shown by medical personnel in this pandemic is magnificent. Those nurses and doctors are living testimony that we as human beings still value one another’s lives; and that all lives must be saved.”

Pope Francis Thanks Nurses, Midwives For 'Service To Humanity'

Pope Francis Thanks Nurses, Midwives For 'Service To Humanity'

Pontiff pays tribute to nurses who contracted COVID-19 and died, saying 'the Lord knows each of them by name' || The...

May 12, 2020
Copyright 2020 Maryknoll Fathers and Brothers. All Right Reserved.
Back to top